ATLANTA — Brad Raffensperger, the beleaguered top elections official in Georgia, considers himself the most loyal of Republicans. There was no question which candidates he would support in last week’s election.

“I’ve only ever voted for Republicans,” Mr. Raffensperger said in an interview in his office at the State Capitol on Tuesday. “I’ve been a Republican, or conservative, you know, since I was a teenager.”

Indeed, since taking office in January 2019, Mr. Raffensperger, the secretary of state, has been a target for Democrats in Georgia’s high-stakes, passionate and bitterly partisan voting wars.

In his nearly two years on the job, he has championed policies to guard against a threat of voter fraud that Democrats say hardly exists. He has been the subject of multiple lawsuits, and of television ads blaming him for presiding over a botched June primary that left voters waiting for hours in long lines. Democrats have also accused him of “state sponsored voter intimidation.”

But this week, he became the target of his own party, with the state’s two incumbent Republican senators calling for his resignation and condemning the presidential election as an “embarrassment,” an allegation he called “laughable.” On Wednesday, he authorized a hand recount of Georgia’s ballots for the presidential race — a move championed by President Trump but one officials have said was unlikely to erase President-elect Joseph R. Biden Jr.’s narrow but significant lead in the state. 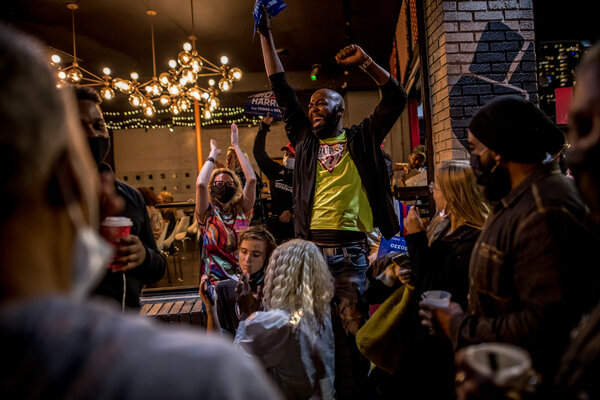 Now Mr. Raffensperger, a civil engineer and a numbers guy who received high marks from national experts on the smooth election operations in Georgia on Nov. 3, finds himself defending an electoral process that he said has no reason to be mistrusted.

Criticism has come from Mr. Trump and the state’s senators, Kelly Loeffler and David Perdue, who are each facing competitive January runoffs that could determine control of the Senate. The senators declared in a joint statement on Monday that Mr. Raffensperger had “failed the people of Georgia” and did not deliver “honest and transparent elections.”

“I was fully expecting it to come from the one side,” Mr. Raffensperger said of the criticism. But, he added, “not from your own ranks.”

It was a twist that few saw coming.

Mr. Raffensperger said he had no plans to step down, and emphasized that the statewide vote count was legitimate. There may have been “isolated incidents” of irregularities, he said in the interview this week, and his office was investigating those.

“But we have not heard of any widespread voter fraud,” he said.

The Trump campaign, however, has continued to claim that much went wrong in Georgia’s elections, part of a broader narrative of national voter fraud that has been almost uniformly rejected by elections officials from both parties.

On Tuesday, the campaign and the Georgia Republican Party sent Mr. Raffensperger a letter claiming “hundreds of reports of voting discrepancies,” including “tens of thousands of ballots being unlawfully counted.”

The letter demanded, among other things, a hand recount of the nearly five million votes cast. It also asked that Mr. Raffensperger “trace the chain of custody of the ballots from printing to sending, from receipt to counting” in an election that, because of the coronavirus pandemic, involved hundreds of thousands of mail-in absentee ballots — not unlike the situation in dozens of other states.

On Wednesday morning, Mr. Raffensperger announced a hand recount of ballots in all 159 counties, an order that applies only to the presidential ticket. Even if Mr. Trump were to win Georgia, Mr. Biden has already won the national election.

This week, other Republicans have also raised questions about the election process that Mr. Raffensperger has overseen. Gov. Brian Kemp, a Republican and the former secretary of state, said Mr. Raffensperger needed to take “a serious look” at allegations of irregularities. All members of the 2021 House Republican delegation from Georgia made a similar request.

In his office on Tuesday, Mr. Raffensperger, a tall, silver-haired man with an austere mien, seemed both calm and cautious as he described Georgia’s predicament — as well as his own. Sometimes he looked to Jordan Fuchs, the deputy secretary of state, who reminded him of the first words of answers they had apparently rehearsed.

Asked if he thought he was being thrown under the bus by fellow Republicans, he took what seemed like subtle digs at Mr. Trump, who on Wednesday was trailing Mr. Biden by about 14,000 votes in Georgia, and Ms. Loeffler and Mr. Perdue.

“Well, in Georgia, you have to win over 50 percent, and then you’re not in a runoff,” he said of the senators. “And if you win big, this wouldn’t be an issue.”

The attacks on Mr. Raffensperger have cracked the facade of Republican unity before some of the most important runoff elections in recent American history. They also appear to be a way for Ms. Loeffler and Mr. Perdue to curry favor with Georgians who, like the senators, are devoted fans of the president and outraged about the vote count.

But the strategy also carries some risk. Telling Trump supporters the election process is rigged in Georgia could dissuade them from voting in the runoffs. And the anger over Mr. Raffensperger’s treatment is simmering among some longtime Republicans.

Leo Smith, a consultant with Mr. Raffensperger’s office and a former director with the state’s Republican Party, called the criticism of the Georgia vote “an insult to those hard-working, committed Republicans who oversaw the election.” In an interview, Mr. Smith described Mr. Raffensperger’s critics as “people who were caught in this poor leadership from a petulant president who has lost, and is using his loss to bully other Republicans into complying with conspiracy theories about voting.”

Mr. Raffensperger, 65, began his political career on the City Council in the affluent northern Atlanta suburb of Johns Creek. In public, he exhibits a kind of punctilious blandness, with a voice that rarely rises above the dispassionate tone of a functionary behind the desk at a Department of Motor Vehicles office.

Even so he is considered highly ambitious, and observers note that Mr. Kemp showed how the secretary of state’s office could be used as a springboard.

After his City Council stint, Mr. Raffensperger, who is married and has two living adult sons and a third who died in 2018, spent a few years in the State Legislature. In his 2018 bid for the secretary of state, he lent his campaign hundreds of thousands of dollars, telling voters he would focus on “protecting our elections,” particularly from immigrants who entered the country illegally.

He did not garner more than 50 percent of the vote and ended up in a runoff with a Democrat, former U.S. Representative John Barrow, at a time when much of the nation had begun asking whether Georgia’s election system was truly fair.

A few weeks earlier, Stacey Abrams, a rising star in the Democratic Party, had narrowly lost to Mr. Kemp in her bid to become the state’s first Black governor. Along the way, she and her supporters had argued that Mr. Kemp had been helped by voter suppression tactics he had engaged in as secretary of state.

Shortly after Ms. Abrams’s loss, an organization she founded, Fair Fight Action, filed a lawsuit that claimed the state had dropped more than 100,000 inactive voters from its rolls. As a result of the lawsuit, 22,000 were reinstated.

Last year, state lawmakers passed legislation that lengthened how long registered voters could be inactive before their names could be purged. The Legislature also virtually eliminated a rule that signatures on voter registration cards had to be matched to other records.

Fair Fight Action has continued to take a central role in criticizing Mr. Raffensperger’s election policies in a state where Republican dominance has been challenged by a resurgent Democratic Party, fueled in part by changing demographics.

In April, Lauren Groh-Wargo, Fair Fight Action’s chief executive, criticized Mr. Raffensperger after he announced the creation of an absentee ballot fraud task force, anticipating the widespread use of such ballots during the pandemic.

When Mr. Raffensperger took office last year, he inherited litigation that challenged the safety of the state’s voting machines, claiming they were vulnerable to hacking, and was charged with introducing a new system. Its complexity — combined with no-shows by hundreds of poll workers who feared catching the virus — led to a meltdown during Georgia’s primary in June, with machine malfunctions and long lines.

Hoping to avoid a similar disaster during the general election, county officials, aided by the state and nonprofit groups, began a massive poll worker recruitment effort and Mr. Raffensperger vowed to send technicians to every polling site on Election Day. Voters across Georgia were inundated with the message that they should vote by absentee ballots or at early voting sites.

The result was record turnout in Georgia and smooth in-person voting on Nov. 3.

Andrea Young, the executive director of the A.C.L.U. of Georgia, praised Mr. Raffensperger’s handling of this year’s general election and characterized this week’s criticism as “voter suppression 2.0.”

“As a child of the South,” she said, “it just sounds like too many Black people voted and we don’t like it.”

But now those numbers are being questioned. Mr. Raffensperger said he only wanted to inspire trust in the system, even as it appeared to be slipping away.