Home » Americas » Economic Policy Has Become a Partisan Game. That Could Do Long-Term Harm.

Economic Policy Has Become a Partisan Game. That Could Do Long-Term Harm. 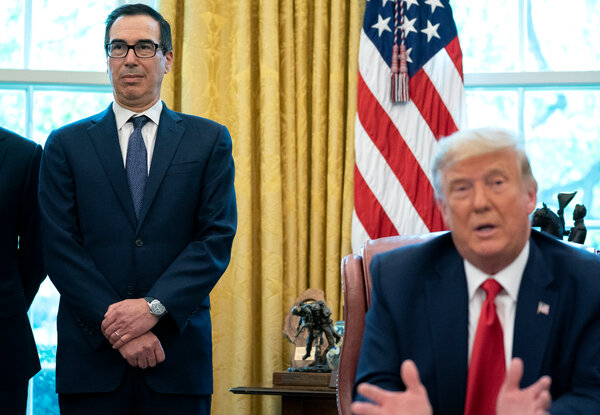 Imagine a divorced couple that simply can’t get along. They share custody of the children, but have completely different visions of how to raise them.

It is not an ideal situation, but this couple realizes that, despite mutual resentments, raising healthy, happy children is a shared goal. Each parent may get annoyed at the other now and again, but they know they need to maintain some continuity in how the children are raised and not let disputes ruin their lives.

That, in recent decades, has been how economic policy has worked in the United States. Republicans and Democrats might have had different agendas and philosophies, but both fundamentally wanted a vibrant United States economy and, when the time came for one party to hand over control to the other, both ensured a smooth transition of economic policy.

No transition is perfect, but this was broadly true when the George H.W. Bush administration handed over control to Bill Clinton’s team, when the Clinton administration gave way to George W. Bush, and most notably when the Bush team handed the reins to Barack Obama’s administration in the midst of a deep economic crisis. The Obama-to-Trump transition was similarly smooth.

This week, there are clear signs that tradition is breaking down — that the outgoing Trump administration is seeking to deprive President-elect Joe Biden of crucial tools to sustain and revitalize the economy. It suggests a future in which there is less continuity in economic policy and more abrupt risk of crisis or downturn every time party control changes.

The most startling was a decision on Thursday by Treasury Secretary Steven Mnuchin not to extend beyond the end of the year several joint Treasury-Federal Reserve lending programs that started in the early weeks of the Covid pandemic. The decision to end them went against Fed officials’ wishes, and he asked the Fed to return to the Treasury funds already provided for those programs.

Mr. Mnuchin said Friday that the move was not driven by politics and reflected the wishes of Congress. But the effect would be to give Mr. Biden’s Treasury secretary less flexibility to expand the programs that worked wonders to prop up financial markets through the spring and summer — just as a new wave of coronavirus infections creates deep economic risks for the winter.

The other big piece of Federal Reserve news this week fits the pattern as well.

When President Trump nominated Judy Shelton to be a Fed governor, she quickly encountered strong opposition from Democrats and misgivings by a handful of Republican senators. One important reason for the reservations: After a career as a commentator advocating hard money and tying the value of the dollar to gold, she pivoted when Mr. Trump began pressuring the Fed to cut rates, aligning herself with the president’s easy-money preferences.

It created the appearance that she was a partisan actor who, rather than apply a consistent philosophy to try to make the American economy as healthy as it can be, would pivot on a dime to try to strengthen the economy during a Republican administration and slow it in a Democratic one.

On Tuesday, in a dramatic moment, with Senator Kamala Harris (now also the vice president- elect) racing to Washington and two Republican senators rendered unavailable for coronavirus-related reasons, Ms. Shelton fell just short of the votes needed to put her on track to join the Fed’s board of governors.

There is no modern precedent for a president to try to fill Fed governor seats while a lame duck, and if confirmed Ms. Shelton would be the first Fed governor to take office without confirmation votes from the opposite party. (The Senate still has time to confirm her, but the math is tenuous.)

To Democrats, the last-ditch effort to confirm Ms. Shelton implied not only that Mr. Biden would have one less important economic policy appointment to make, but also that he might have to deal with a policymaker seeking to undermine his administration from within the central bank. (Mr. Trump has also nominated a second Fed governor, Christopher Waller, who may well be confirmed before Mr. Biden takes office — though he falls more squarely in the tradition of Fed governors with technocratic independence, and has attracted some Democratic support.)

Only a dozen years ago, consider what happened during the transition from George W. Bush to President Obama. The economy was in the worst phase of the global financial crisis, and President Bush had secured a $700 billion financial rescue package from Congress just before the election.

That bank rescue, known as the Troubled Asset Relief Program, was divided into two $350 billion tranches, with the president required to ask Congress for the second tranche to obtain it. Not only did President Bush not try to block the Obama team from having access to the bailout money upon taking office, but at Mr. Obama’s request he also took the politically unpopular step of requesting the second tranche in January 2009, days before Mr. Obama was inaugurated.

That step helped keep a bipartisan gloss on the financial rescue, gave the Obama administration access to the funds sooner rather than later, and enabled Mr. Obama to take office without making one of his first actions the politically toxic act of asking for more bank bailout money.

One problem with the more partisan economic policy transition underway now is that it tends to fuel tit-for-tat reciprocity. If President Biden is handing over power to a Republican in the winter of 2025 or 2029, will his team seek the same partisan advantage by salting the earth on the way out? If this is the new normal, is it possible to go back to the old normal?

If not, it puts at risk the steady continuity that has helped make the United States the richest nation on earth — the sense among officials at the Treasury and the Federal Reserve that they are all ultimately on the same team, rather than partisan actors trying to seize short-term advantages for their team.

Sometimes, even when a divorce is bitter, everyone needs to take a deep breath and think about what’s best for the children.