Donald Trump has accused practising Roman Catholic Joe Biden of being “against God” as he scrambles to win voters in the swing state of Ohio.

The US president told a small crowd at a Cleveland airport on Thursday his Democratic opponent, who is leading in four Ohio presidential election polls, wants to “hurt God”.

“He’s following the radical-left agenda: take away your guns, destroy your second amendment, no religion, no anything, hurt the Bible, hurt God,” Mr Trump said about Mr Biden. 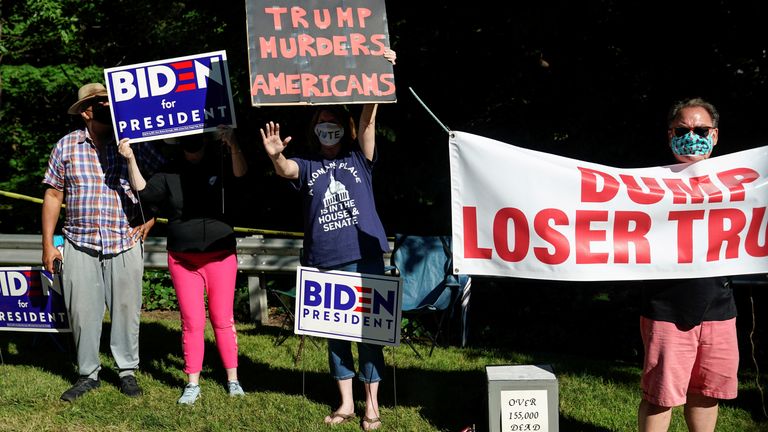 The US constitution’s second amendment gives Americans the right to keep and bear arms.

Mr Trump did not explain what he meant by his accusation but in a country where religion is taken very seriously, it could solidify support for the president from the Republicans’ large conservative Christian bloc.

The president is trying to claw back support as his handling of the coronavirus pandemic threatens his chances of a second term. Mr Biden called his Republican opponent’s attack “shameful” and said his faith has been the “bedrock foundation” of his life.

“They show us a man willing to stoop to any low for political gain, and someone whose actions are completely at odds with the values and teachings that he professes to believe in.”

More than three-quarters of Americans practise Christianity or another religion, according to the Pew Research Center. Mr Biden has often spoken about the role his faith has played in his life, especially during tragedies such as losing his first wife and daughter in a car accident and his son, Beau, to cancer.

He regularly wears his late son’s rosary on his wrist and previously said Catholicism gives him “some reason to have hope and purpose”.

Mr Trump seldom speaks about his Presbyterian faith and rarely attends church, but he works closely with evangelical Christians and puts their causes of restricting abortion at the top of his policy agenda, as well as preserving gun ownership.

With remarks about poll watchers and the Supreme Court, Trump stepped up attempts to sow doubt on the vote.

How the internet viewed the debate: poorly.