Does It Hurt Children to Measure Pandemic Learning Loss?

Over the past year, Deprece Bonilla, a mother of five in Oakland, Calif., has gotten creative about helping her children thrive in a world largely mediated by screens.

She signed them up for online phonics tutoring and virtual martial arts lessons. If they are distracted inside the family’s duplex, she grabs snacks and goes with the children into the car, saying they cannot come out until their homework is done. She has sometimes spent three hours per day assisting with school assignments, even as she works from home for a local nonprofit organization.

It all sometimes feels like too much to bear. Still, when her fifth-grade son’s public-school teacher told her he was years behind in reading, she was in disbelief.

“That was very offensive to me,” she said. “I’m not putting in myself, my hard work, his hard work, for you to tell me that he’s at second-grade reading.”

Ms. Bonilla’s experience illustrates a roiling debate in education, about how and even whether to measure the academic impact of the coronavirus pandemic on the nation’s children — and how to describe learning gaps without stigmatizing or discouraging students and families.

Studies continue to show that amid the school closures and economic and health hardships of the past year, many young children have missed out on mastering fundamental reading and math skills. The Biden administration has told most states that unlike in 2020, they should plan on testing students this year, in part to measure the “educational inequities that have been exacerbated by the pandemic.”

But others are pushing back against the concept of “learning loss,” especially on behalf of the Black, Hispanic and low-income children who, research shows, have fallen further behind over the past year. They fear that a focus on what’s been lost could incite a moral panic that paints an entire generation as broken, and say that relatively simple, common-sense solutions can help students get back up to speed. 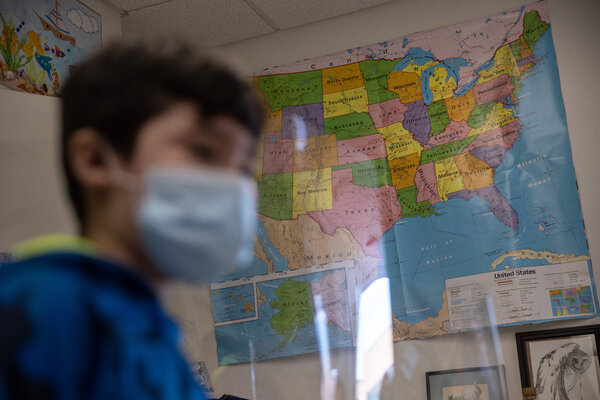 “This isn’t a lost generation,” said Kayla Patrick, a policy analyst at the Education Trust, a national advocacy group focused on low-income students and students of color. “They just need extra support — in many cases, the support they probably needed before the pandemic, like tutoring.”

Others go further, arguing that regardless of what terminology is used, standardized testing to measure the impact of the pandemic is unnecessary or even actively harmful. Voices as prominent as the former New York City schools chancellor, Richard Carranza, and the Massachusetts Teachers Association, the state’s largest educators’ union, have encouraged parents to opt their children out of state tests during the pandemic. “We do not want to impose additional trauma on students that have already been traumatized,” Mr. Carranza said.

This week, the nation’s largest school system, in New York City, announced that parents would have to opt their children in to state standardized testing, which could lead to a smaller group of students taking the exams, and results that will be difficult to interpret.

Jesse Hagopian, a Seattle high school teacher and writer, said testing to measure the impact of the pandemic misses what students have learned outside of physical classrooms during a year of overlapping crises in health, politics and police violence.

Mr. Hagopian said he believed that “learning loss” research was being used to “prop up the multi-billion-dollar industry of standardized testing” and “rush educators back into classrooms before it’s safe to do so.”

Some of the recent research has been conducted by outfits that create and license academic assessments, but other research has been led by independent scholars. Both types of studies show some students are struggling.

A preliminary national study of 98,000 students from Policy Analysis for California Education, an independent group with ties to several large universities, found that as of late fall, second graders were 26 percent behind where they would have been, absent the pandemic, in their ability to read aloud accurately and quickly. Third graders were 33 percent behind.

Those differences were equivalent to being able to read seven to eight fewer words per minute accurately.

Heather J. Hough, an author of the working paper, said schools might need to provide extra instructional time to help students catch up. But she warned against an approach that focused only on academics, saying that young children needed recess, playtime and social time — some of which have been in short supply during the pandemic — to be able to absorb new information effectively.

“That is as critical to early reading development as the technical skills,” she said.

While there are deficits across demographic groups, the gaps were larger in schools that serve predominantly Black, Hispanic or low-income students.

At least one large study found no decline in fall reading performance, and only modest losses in math. But testing experts caution that the true impact of the pandemic on learning could be greater than is currently visible. Many of the students most at risk academically are missing from research because they are participating irregularly in online learning, have not been tested or have dropped off public school enrollment rolls altogether. In addition, some students have been tested at home, where they could have had assistance from adults.

Debates about the extent of missed learning are more than academic. If remote school is actively harming children’s skill development, it becomes harder for teachers’ unions, school boards or administrators to argue that schools should remain shuttered as vaccines roll out across the nation, or should operate only on limited schedules.

Nationwide, about half of students attend schools that are currently offering daily, in-person learning. Federal data shows stark disparities. As of January, the majority of Black, Hispanic and Asian-American fourth graders were learning fully remotely, compared to a quarter of white fourth graders. And West Coast schools are lagging significantly behind in reopening.

It is not yet clear from research to what extent school closures have driven learning deficits during the pandemic, as opposed to the other upheavals families have endured, from job loss and housing instability to illness and lack of reliable child care. Many families continue to choose remote learning even where schools are open.

But some experts, like Ms. Patrick of the Education Trust, warn against continued online instruction, despite its popularity with a subset of parents and students. Research suggests that in-school tutoring from a highly trained teacher or aide, ideally one-on-one or in a small group, can help students who are behind catch up academically — services that could be paid for with the billions of stimulus dollars districts are set to receive from Washington.

In Oakland, nonprofit organizations have been able to provide some of the personalized academic support that parents say their children need to stay on track.

Almarie Frazier’s 12-year old daughter, Kamari, has been writing poetry in the program and studying science, while her 7-year old son, Wayne, is receiving small-group reading tutoring via Zoom. It has been a refreshing experience after months of frustration with the school district, Ms. Frazier said, in which online systems failed to accurately record her daughter’s assignments or attendance, forcing Kamari to stay up late into the night to catch up on schoolwork.

“There is still a disconnect,” she said of her relationship with the district during remote learning.

Lara Uhrbrock, a tutor with Oakland Reach, said that many students were behind but not irreparably so, and that they mostly needed to brush up on forgotten skills. Equally important was connecting with children and parents emotionally, she said, given the stress of the past year.

“You bridge the academics with a little bit of, ‘Hey, how are you? How is your day? Do you need something?’” she said. “They want to know you are invested.”