MIAMI — Shouting “Freedom” and other anti-government slogans, thousands of Cubans took to the streets in cities around the country on Sunday to protest food and medicine shortages, in a remarkable eruption of discontent not seen in nearly 30 years.

Thousands of people marched through San Antonio de los Baños, southwest of Havana, with videos streaming live on Facebook for nearly an hour before they suddenly disappeared. As the afternoon wore on, other videos appeared from demonstrations elsewhere, including Palma Soriano, in the country’s southeast. Hundreds of people also gathered in Havana, where a heavy police presence preceded their arrival.

One clip circulating on Twitter showed protesters overturning a police car in Cardenas, 90 miles east of Havana. Another video showed people looting from one of the much-detested government-run stores, which sell wildly overpriced items in currencies most Cubans do not possess.

In a country known for repressive crackdowns on dissent, the rallies were widely viewed as astonishing. Activists and analysts called it the first time that so many people had openly protested against the Communist government since the so-called Maleconazo uprising, which exploded in the summer of 1994 into a huge wave of Cubans leaving the country by sea.

Carolina Barrero, a Cuban activist, went even further. “It is the most massive popular demonstration to protest the government that we have experienced in Cuba since ’59,” she said by text message, referring to the year Fidel Castro took power. She called the public outpouring on Sunday “spontaneous, frontal and forceful.”

“What has happened is enormous,” she added.

The protests were set off by a dire economic crisis in Cuba, where the coronavirus pandemic has cut off crucial tourism dollars. People now spend hours in line each day to buy basic food items. Many have been unable to work because restaurants and other businesses have remained on lockdown for months. 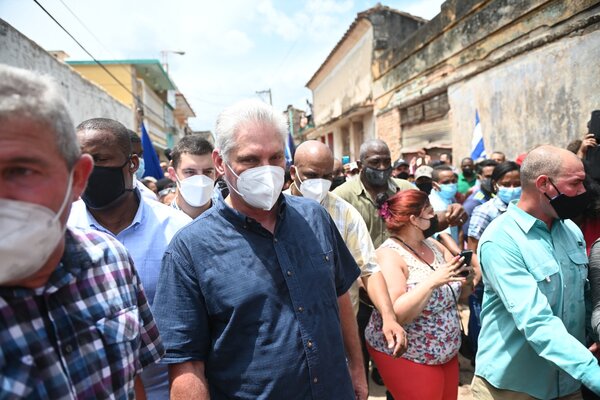 The desperate conditions have triggered an uptick in migration by both land and sea.

Since the start of the fiscal year last October, the U.S. Coast Guard has intercepted more than 512 Cubans at sea, compared with 49 for the entire previous year. On Saturday, the Coast Guard suspended the search for nine Cuban migrants whose vessel overturned at sea off Key West, Fla.

The Cuban government attributes its longstanding economic problems to the American trade embargo, which cuts off its access to financing and imports. But the pandemic has worsened conditions, and in Matanzas, east of Havana, some patients and their families have resorted to posting videos on YouTube of furious people screaming about the lack of medicine and doctors.

The Cuban Ministry of Health website says the nation of 11 million now has about 32,000 active cases of Covid-19. It reported 6,923 daily cases and 47 deaths on Sunday, breaking its prior record, set just Friday. Only about 15 percent of the population is fully vaccinated, the government said.

The protest movement gained momentum after a number of celebrities started tweeting with the hashtag #SOSCuba. Mia Khalifa, a former adult film actress with nearly four million followers on Twitter, joined in by tweeting insults directed at the president. The president’s office even responded to criticism by a Puerto Rican singer, Residente. The post was later removed.

President Miguel Díaz-Canel took office three years ago, the first time someone outside the Castro family was allowed to take the post. Raúl Castro, who had already handed over the presidency, then stepped down as the leader of the Communist Party this year.

Mr. Díaz-Canel’s term was, at first, marked by increased access to the internet, which helped fuel public discontent against him, particularly by artists.

Cuba’s foreign minister, Bruno Rodríguez, confirmed via Twitter that Mr. Díaz-Canel had rushed to San Antonio de los Baños, where the government insisted that “salaried” protesters were trying to provoke a severe reaction by the authorities.

“Celebrating what they orchestrated today in San Antonio de los Baños only uncovers the worst nature of people,” a government Twitter account quoted the president as saying.

“Cubans know perfectly well that the government of the United States is principally responsible for Cuba’s current situation,” the foreign ministry said in a Twitter post. “Cuba and its streets belong to the revolutionaries.”

Within hours of the extraordinary events, the president broke into national television programming to urge government supporters to hit the streets and confront the protesters. He blamed the United States for restricting exports, access to funds and travel to Cuba, which led to widespread shortages.

Mr. Díaz-Canel said in televised remarks on Sunday that the protests were a form of “systemic provocation” by dissidents doing the bidding of the United States. He said Washington in recent months had sought to destabilize and weaken the island’s economy as part of a policy designed to “provoke a massive social implosion.”

Granma, the Cuban Communist Party newspaper, said in a rare reference to demonstrations that people who took to the streets on Sunday included government supporters who “may have been confused by disinformation on social media.”

Earlier on Sunday, Mr. Díaz-Canel posted photographs of nurses and other medical personnel arriving by bus in Matanzas. But it was too late: The months of pent-up frustration exploded.

“They should be calling for peace and dialogue, not blood,” Andy Ruiz, a protester in Havana, said in an interview. “What I saw today was people seeing freedom for the first time.”

Adonis Milán, a theater director in Havana, said the extreme conditions became too much to bear.

“This is no longer a question of freedom of expression; it’s a question of hunger,” Mr. Milán said. “People are hitting the street. They are asking for an end to this government, to one-party rule, to repression and the misery we have lived through for 60 years.”

A few hours later, he called back, sobbing, saying that the internet had been cut off, that anti-riot squads were in the streets and that a number of artists had been arrested after they demanded airtime on national television.

“I managed to escape,” he said.