Donald Trump has been receiving treatment for COVID-19 for several days.

Here is a look at what is known as he tries to make a full recovery just a month before the 3 November presidential election.

During the evening, Mr Trump was diagnosed with COVID-19.

It came a day after one of the president’s closest advisers, Hope Hicks, had displayed symptoms of the virus and later tested positive.

In the early hours, Mr Trump used Twitter to reveal he and the first lady Melania had tested positive for the coronavirus.

On Friday morning, the 74-year-old leader had a fever and his oxygen saturation levels had dropped to below 94%.

Normal levels should be in the 95-100% range and is important because oxygen is needed throughout the body for organs to function properly.

Doctors at the White House reported Mr Trump was also tired and was given supplementary oxygen for about one hour to lift his saturation levels to above the crucial 95% mark.

He was later given an 8g dose of Regeneron’s antiviral antibody cocktail REGN-COV2 – an experimental treatment – along with aspirin, melatonin, vitamin D, zinc and famotidine.

REGN-COV2 contains lab-generated antibodies that mimic how the body would mount a reaction to a foreign invader. The goal is to boost the immune system’s defences, rather than to wait on human biology to do its job.

Mr Trump was airlifted from the White House to Walter Reed Medical Centre in Maryland for monitoring and for further treatment.

He was administered the antiviral drug remdesivir, originally created to treat Ebola and which curbs the ability of the infection to multiply.

Mr Trump’s blood oxygen level showed another fall, this time dipping to about 93%. His doctors have not revealed whether he was given further oxygen at this moment in his treatment.

The president is given the steroid dexamethasone, which relieves inflammation and is commonly used to treat a range of serious conditions including skin disease, asthma and cancer. 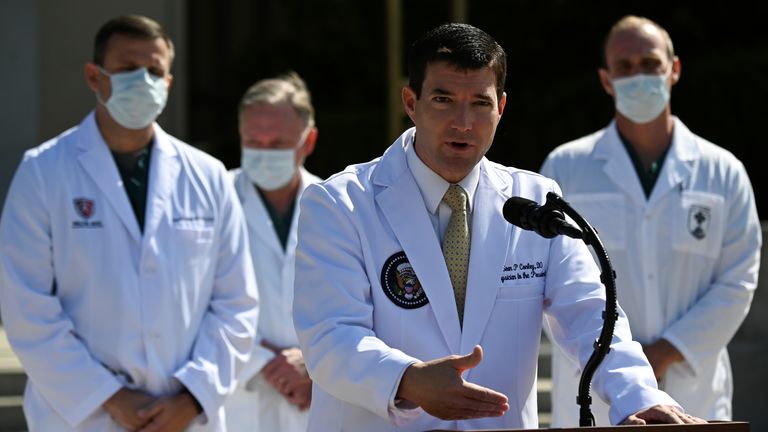 In Mr Trump’s case, it was being used to help treat the low levels of oxygen and may have been given to reduce inflammation in the lungs.

Dexamethasone is shown in studies to improve survival for patients in hospital with severe or critical COVID-19 and who need extra oxygen.

However, it should not be given in mild cases since it can limit the body’s own ability to combat the virus, according to guidelines from the Infectious Disease Society of America.

He also received another dose of remdesivir as part of a five-day course.

His physician Dr Sean Conley revealed in an update that Mr Trump remained free of fever and had made “substantial progress”.

The oxygen levels in Mr Trump’s blood had improved with levels now at 98%, according to Dr Conley.

The medical team continue to monitor the condition of Mr Trump’s lungs amid fears they may have been damaged. It would also allow them to track any early signs of pneumonia.

Asked what any tests had revealed about the condition of Mr Trump’s lungs, Dr Conley said: “There’s some expected findings, but nothing of any major clinical concern.” Dr Adalja said: “The expected finding is that he has evidence of pneumonia in the X-ray. If it was normal, they would just say it is normal.”

There was still no indication of the return of a fever, which the president had last been suffering from on Friday.

His doctors reveal that if Mr Trump continues to improve, he could be allowed to return to the White House on Monday.

Mr Trump makes an appearance outside the medical facility when he waves to supporters as he is driven by in the presidential motorcade. 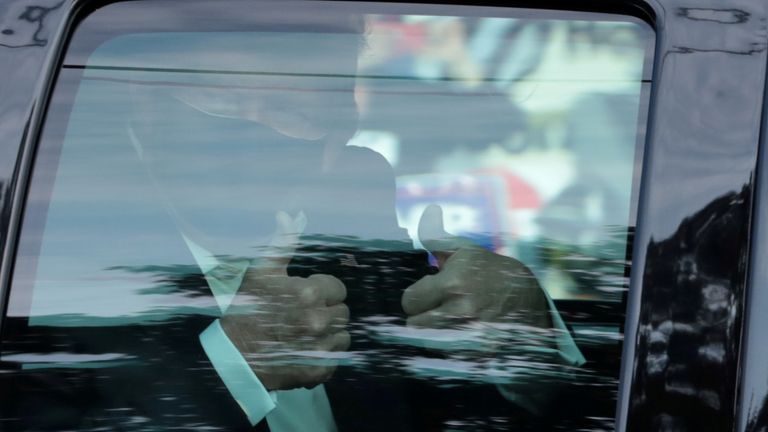 White House chief of staff Mark Meadows said he was optimistic Mr Trump would be discharged on Monday – but a decision will be made later.

In an interview with Fox News, he said he had spoken to Mr Trump and that his condition appeared to have improved overnight.

“We’re still optimistic…that he will be released, but that decision won’t be made until later today,” he added. “His health continues to improve.”

:: Watch Sky News for live coverage of this week’s Vice Presidential Debate in a special programme presented by Dermot Murnaghan in Washington DC from 2am on Thursday.

It Might Become the Scariest Part of Your Commute: The Elevator