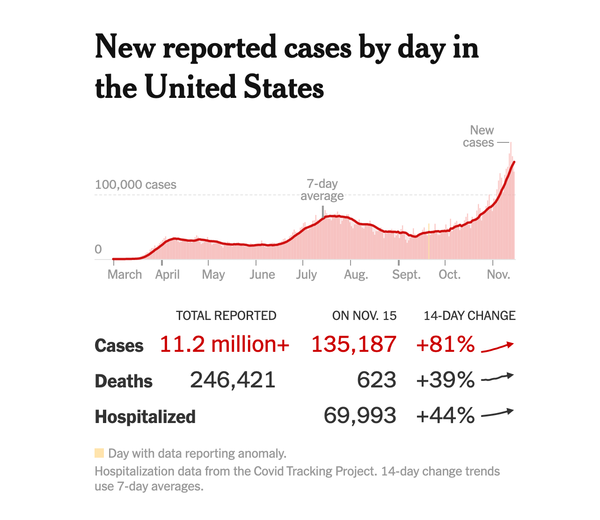 Speaking on the economy, President-elect Joe Biden warned of a “very dark winter” ahead and called on Congress to pass an economic stimulus package immediately.

Researchers say the U.S. is approaching what may be a significant tipping point — a health crisis so widespread that every American knows someone who has been infected.

Get the latest updates here, as well as maps and vaccines in development.

And then there were two

A second pharmaceutical company is reporting encouraging results on a coronavirus vaccine that has far exceeded expectations.

Neither vaccine showed any significant side effects. Research on the two vaccines has been reviewed by outside scientists but has not yet been peer reviewed, and the clinical studies are not yet complete.

Nevertheless, our colleague Carl Zimmer, who covers science for The Times, said the Moderna news was a big deal.

“The F.D.A. set a very modest target of 50 percent efficacy, so it was pretty impressive when Pfizer blew past that,” Carl told us. “I think it’s more impressive when Moderna blows past it, too. It shows that there wasn’t anything super special about Pfizer’s secret sauce.”

Both vaccines are based on an experimental method that opens the door to an entirely new way of creating vaccines very quickly. They use a package of genetic instructions called messenger RNA to program human cells to make copies of a fragment of the virus. That fragment sets off alarms in the immune system and stimulates it to attack, should the real virus try to invade.

“Vaccine makers had to pick a target on the virus for their vaccines, and both of these vaccines picked the same target — it’s called the spike protein,” Carl said.

The biggest apparent difference between the two vaccine candidates, Carl said, is how they will be delivered. Pfizer’s vaccine has to be kept at minus 94 degrees Fahrenheit, while Moderna’s can be delivered at minus 4 degrees Fahrenheit. Moderna said its vaccine had a longer shelf life in the refrigerator than previously thought: 30 days, not seven. And it will last 12 hours at room temperature, the company said.

There are dozens of vaccines under development around the world and we need as many as possible, because Pfizer and Moderna will not have nearly enough doses ready to vaccinate everyone in the U.S., let alone the world, Carl said.

And while we know more about these two vaccines, there are still some big outstanding questions.

How long will it take for the vaccines to become widely available?

Will they work equally well in older and younger people? What about children, who are not included in the initial vaccine trials, and those with pre-existing conditions?

Will the vaccines prevent people from spreading the virus?

How long will immunity last?

Restrictions on the rise

Despite the positive vaccine news, there is still plenty of cause for concern in the U.S. The country is averaging 150,000 new cases a day and just surpassed 11 million total cases. Sometime this week, we expect to tell you that 250,000 Americans have died from the virus. Cases are surging in 48 states.

In Chicago, a sweeping stay-at-home advisory went into effect today. Philadelphia will prohibit indoor dining and close gyms, libraries and museums beginning Friday. California will ban indoor operations in museums, houses of worship, gyms and restaurants in most of the state beginning tomorrow, and the governor is considering a curfew. In Michigan, Gov. Gretchen Whitmer will shut down some businesses and halt in-person learning at high schools and colleges for three weeks beginning Wednesday.

If you haven’t felt the seriousness of the latest surge yet, then maybe you haven’t been to a supermarket. Many businesses in the U.S. have recently put in place new restrictions as they brace for a long winter.

The grocery chains Kroger and Wegmans have begun limiting purchases of items that were in high demand earlier in the pandemic, like toilet paper, paper towels, disinfecting wipes and hand soap.

Walmart is now counting the number of people who enter its stores, to ensure they don’t exceed capacity. Costco members with a medical condition used to be exempt from wearing a mask; now they must wear a face shield instead.

Tell us about your Thanksgiving plans

As coronavirus cases surge ahead of Thanksgiving, many families and friend groups are swapping out big holiday gatherings for pandemic-friendly celebrations. Some people are planning to drop off food at relatives’ houses. Others are sharing and cooking recipes so that they can enjoy the same meal together on Zoom.

We’d like to know how your family is adjusting Thanksgiving traditions this year. Please tell us by filling out this form. We may use your response in an upcoming newsletter.

Prime Minister Boris Johnson of Britain, who had a bad case of Covid-19 in April, is in quarantine after coming into contact with a lawmaker later found to be infected.

The Navajo Nation reinstated a stay-at-home order for the next three weeks after health officials warned of “uncontrolled spread” of the virus across the vast reservation.

Sweden will reduce the limit on public gatherings to eight people from 300, as part of a new approach that runs counter to the country’s previously lax virus restrictions.

India will fly doctors into the region around New Delhi, double the number of tests it carries out and ensure that people wear masks, in an effort to contain the spread of coronavirus in the capital, Reuters reports.

Here’s a roundup of restrictions in all 50 states.

About a half-dozen states have planned their own reviews of vaccines. But many public health experts say the state reviews could create inconsistency and sow doubt about the shots.

Doctors are calling it quits. Thousands of medical practices in the U.S. are closing, as health care workers decide to retire early or shift to less intense jobs.

In the Minnesota section of the The Minneapolis Star-Tribune on Sunday, two-thirds of the 16 pages were filled with obituaries.

Representative Don Young of Alaska, the oldest member of the House, tweeted that he “is alive” after being hospitalized for the virus.

New York City’s tourism industry will need at least four years to recover from the free-fall prompted by the pandemic.

The N.C.A.A. will hold its men’s basketball tournament in just one city in 2021, citing pandemic concerns.

In an online video, the German government praised the country’s heroic couch potatoes who, “lazy as raccoons,” fight the virus by staying home, Deutsche Welle reports.

My mom has been making cross-stitch Christmas stockings every holiday season as far back as I can remember — she’s made one for almost every member of our family. She was working on one for my grandmother when she decided her eyesight wasn’t good enough to continue. She sent it to me to scrap for parts and material, but I’ve been secretly working on it and hope to finish it by Christmas to give to my grandma from both of us. Especially this year when we won’t be seeing any family, its particularly lovely to feel more connected to the women in my family.

Email your thoughts to [email protected]