They promised a service for George Floyd that would be a “foot-stomping, toe-tapping, shouting hallelujah, praise god” sort of event.

They delivered – and also happened to send a message that George Floyd might just have changed the world.

Mr Floyd’s funeral, in his home town of Houston, came 15 days after his brutal death under a police officer’s knee in Minneapolis.

Since then, his name has become a rallying cry for millions seeking a change in the treatment of the African American community.

The service was at times heart-wrenching: the grief in the faces and the words of his family a reminder that his death remains very raw and personal to many.

But the religious and political messages were powerful too, as was the resolve not to let this moment of protest pass without real systemic change.

The civil rights leader, the Reverend Al Sharpton told the congregation: “Until we know the price for black life is the same as the price for white life, we’re gonna keep coming back to these situations over and over again.”

Joe Biden’s video message and the invocation by Mr Floyd’s niece of Donald Trump’s 2016 campaign message highlighted how this is now a political issue.

“Why must the system be corrupt and broken,” asked Brooke Williams. “Laws were already out in place for the African American system to fail.

“No more hate crimes, please. Someone said ‘Make America great again’ but when has America ever been great?”

The message was unequivocal: that if people are seeking real change in society it will only come at the ballot box in November.

There is some fear amongst those leading this movement that momentum will be lost if George Floyd’s story fades from the headlines.

But from the ordinary members of the public to the big names of Hollywood, those at the funeral were optimistic.

“After George Floyd I think everything is going to change for the better,” said Reginae Traylor. “We already have a movement going on around the world.”

The actor Jamie Foxx said the evolution of the protests was key. “I’m sure when they put those military people out there and they ran around the corner and saw young white kids protesting, they saw the whole world explode with humanity. It is different. They finally got a chance to see what we’ve been saying for the longest time.” 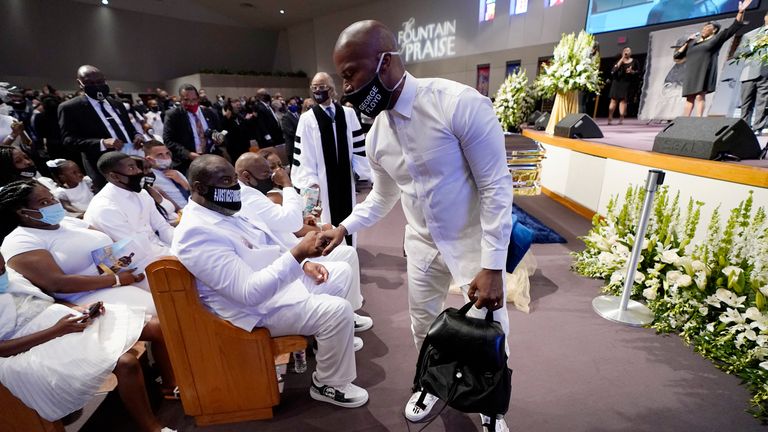 The anxiety to keep George Floyd’s name alive was repeatedly channelled through his young daughter Gianna. “Daddy changed the world,” she said, a hope many want to see fulfilled.

His brother will testify at a congressional hearing into police brutality today, another small step towards change, another sign of George Floyd’s legacy.

Of all the powerful moments at the funeral though, Dray Tate’s performance of Sam Cooke’s civil rights anthem ‘A Change is Gonna Come’ was among the most poignant.

There is hope in that sentiment and, as the lyrics say: “it’s been a long time coming.”