Respect for the United Nations in Haiti was “forever destroyed” by the cholera epidemic that ravaged the impoverished country after the 2010 earthquake, the leader of the global organization during that period said in a new book.

Ban Ki-moon, the South Korean statesman who was the United Nations secretary general from 2007 to 2016, also asserted in his book that the organization should have done far more to arrest the cholera scourge, which at least three investigations linked to poor sanitation by U.N. peacekeepers there.

“Our delayed and insufficient early response had made the tragedy worse,” Mr. Ban wrote.

But he also expressed disdain for Haiti’s leaders — particularly its president at the time of the quake and cholera outbreak, René Préval, whom he described as lost, panicked and paralyzed.

And Mr. Ban was similarly critical of aggrieved cholera victims and their lawyers who unsuccessfully sued the United Nations for compensation in the American court system. He described it as a fraudulent extortion attempt and said it could have undercut U.N. work everywhere if it had prevailed.

James F. Haggerty, one of the lawyers who represented Haitians in that litigation, rejected Mr. Ban’s assertion in an emailed response to a request for comment.

“It is sickening that, after all this time, Mr. Ban still will not accept responsibility for the fact that the United Nations was the cause of the Haitian cholera epidemic,” Mr. Haggerty said.

Mr. Ban never concedes in the book that the United Nations was legally responsible for the epidemic, which sickened more than 800,000 Haitians and killed at least 10,000 in one of the deadliest cholera outbreaks of modern times. 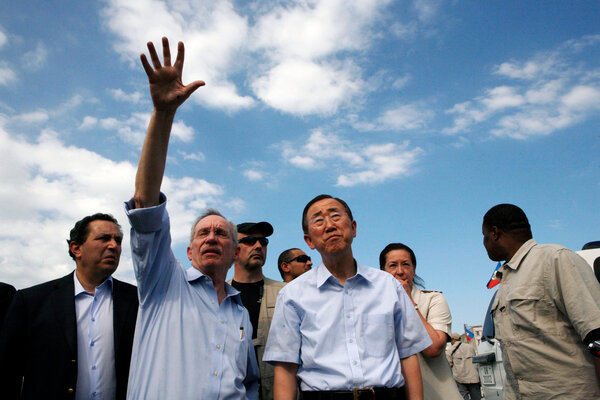 Cholera, a highly contagious infection from feces-contaminated water that causes severe diarrhea and deadly dehydration if left untreated, has abated in Haiti over the past few years. But the epidemic is widely regarded as a stain on the legacy of the United Nations.

“This disaster forever destroyed the United Nations’ reputation in Haiti,” Mr. Ban wrote in the book. “I am sickened that the country has not fully recovered.”

“Resolved: Uniting Nations in a Divided World,” Mr. Ban’s memoir, was published this month by Columbia University Press and devotes a chapter to Haiti and the U.N.’s work in that country, the Western Hemisphere’s poorest. Freed from the constraints of office, Mr. Ban went further than he had while secretary general in describing what, in his view, were the problems he faced with Haiti.

A victims’ compensation fund established by Mr. Ban near the end of his term, financed by voluntary contributions from member states, had less than $20 million as of Sunday, a sliver of the $400 million he had sought. Several diplomats told Mr. Ban their governments “do not want to pay U.N. debts stemming from our own negligence,” Mr. Ban said in the book.

Recalling his own traumatic visit to Haiti a week after the quake struck in January 2010, with vast parts of Port-au-Prince, the capital, in ruins, including the presidential palace, Mr. Ban dwelled on what he described as Mr. Préval’s seeming inability to cope.

“He had not even sent a message of hope to the Haitian people, and I strongly urged him to do so,” Mr. Ban recalled. “But he seemed so shaken that he didn’t know what to do. In fact, he was terrified. He was panicked.”

Mr. Ban acknowledged that the 8,500 United Nations peacekeepers who were deployed in Haiti beginning in 2004 to control criminal gangs “were not beloved by the Haitians, who often thought the peacekeepers stirred up violence instead of quelling it.”

Against this backdrop, Mr. Ban said, Haitians were predisposed to believe that a Nepalese contingent in the peacekeeping force had brought cholera into the country when cases were first reported in October 2010. Nearly six years later, after three investigations, Mr. Ban said, there was “no doubt” that the Nepalese had allowed fecal waste to contaminate a river widely used for drinking, bathing and washing.

Still, Mr. Ban said, he had resisted pressure to accept legal responsibility for the epidemic afflicting the Haitians. But he acknowledged “there was no denying the desperation of their situation,” so he ordered U.N. agencies to “commit all available medical and engineering resources to support sanitation construction in hard-hit areas.”

Near the close of his term in 2016, Mr. Ban came as close as he would to formally apologizing. “We simply did not do enough with regard to the cholera outbreak and its spread in Haiti,” he told the General Assembly. “We are profoundly sorry for our role.”

Even so, Mr. Ban had uncharacteristically unkind words in the book for the legal actions brought by Haitians against him and the United Nations in American courts seeking compensation for the cholera disaster. Those actions were ultimately dismissed because of immunity protections that cover U.N. staff.

“I was incredulous — no, shocked,” Mr. Ban recalled upon having heard the news in 2011 that 500 Haitians were seeking $40 billion in damages for negligence and wrongful death. “I thought this lawsuit was fraudulent from the beginning,” he wrote, “and I was incensed every time I thought about this attempt to extort money from the United Nations.”

Mr. Ban recalled being “too relieved for words” when an appellate court upheld U.N. immunity from such lawsuits in 2016.