PM’s government has been rocked by allegation that undue pressure was put on the country’s former attorney general. 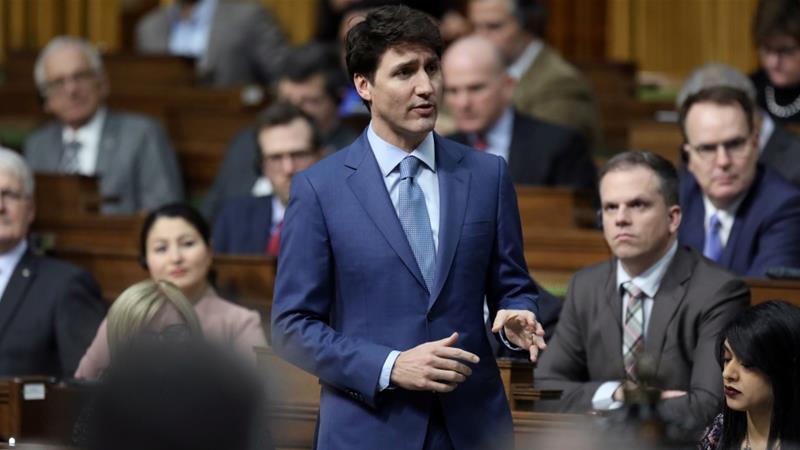 Canada’s Conservative opposition leader has called on Prime Minister Justin Trudeau to resign following allegations that his administration meddled in the prosecution of a major engineering firm, which is accused of committing fraud.

Andrew Scheer said late on Wednesday that Trudeau “has lost moral authority to govern” and “must resign” at once.

“Mr Trudeau can no longer, in good standing and with a clear conscience, lead this great nation,” he added.

For weeks, Trudeau’s government has been rocked by allegations first reported by The Globe and Mail newspaper that undue pressure was put on Jody Wilson-Raybould, the country’s former attorney general, for an out-of-court settlement with SNC-Lavalin.

Earlier on Wednesday, Wilson-Raybould accused Trudeau’s inner circle of pressuring her to defer the prosecution of SNC-Lavalin, one of the world’s top construction and engineering firms based in Montreal.

“I experienced a consistent and sustained effort by many people within the government to seek to politically interfere in the exercise of prosecutorial discretion, in an inappropriate effort to secure a deferred prosecution agreement with SNC-Lavalin,” Wilson-Raybould told a committee in the House of Commons.

She also told the committee that she faced “veiled threats” and advice from Canada’s top bureaucrat, Clerk of the Privy Council Michael Wernick, that “a collision with the prime minister on these matters should be avoided”.

Wilson-Raybould, who was also minister of justice, said she believes she was shuffled to another portfolio in January over her refusal to take action in the case.

Trudeau responded that he “completely disagrees with the former attorney general’s characterisation of events”.

When asked about calls for his resignation, Trudeau told reporters on Wednesday that “Canadians will have a very clear choice in a few months time about who they want to be prime minister of this country and what party they want to form government”. Parliamentary elections are scheduled for October.

On Thursday, Trudeau won the public support of a top political ally, indicating there was no immediate pressure inside the Liberal Party to remove him.

“I have 100 percent faith in the prime minister,” said Foreign Minister Chrystia Freeland, one of the most prominent members of Trudeau’s Cabinet.

SNC-Lavalin was charged in 2015 with corruption for allegedly bribing officials in Libya between 2001 and 2011 to secure government contracts during former strongman Muammar Gaddafi’s reign.

The firm, its international arm and another subsidiary are accused of having offered $36m in bribes to officials and of defrauding the Libyan government of $98m.

The charges relate to the world’s largest irrigation project – the Great Man Made River Project, which aimed to provide fresh water to the cities of Tripoli, Benghazi and Sirte.

SNC-Lavalin has argued that those responsible for alleged wrongdoing left it long ago, and that holding it accountable for their criminal actions would severely hurt its business.

The company heavily lobbied the government, including senior officials in Trudeau’s office, for an out-of-court settlement that would include paying a fine and agreeing to put in place compliance measures.

But Wilson-Raybould refused to ask prosecutors to settle, and the trial is set to proceed.

Trudeau has steadfastly denied any wrongdoing, saying again Wednesday that he had made clear to his former attorney general that the “decision around SNC-Lavalin was Jody Wilson-Raybould’s and hers alone to make”, which she confirmed in her testimony.

“I strongly maintain, as I have from the beginning that I and my staff always acted appropriately and professionally,” he said.

Wilson-Raybould testified, “The prime minister asked me to help out, to find a solution for SNC, citing that if there is no DPA (deferred prosecution agreement), there would be many jobs lost and that SNC would move from Montreal.”

She added, “I told him that I had done my due diligence and had made up my mind on SNC and that I was not going to interfere with the decision of the director (of public prosecutions).”

Wilson-Raybould went on to say that 11 government officials, including the finance minister, raised similar concerns that SNC-Lavalin might move its headquarters to London without a deal, or could face massive job losses if it was found guilty at trial – in an election year.

They “urged me to take partisan political considerations into account, which was clearly improper,” she said.

She added that they continued to “hound” her from September to December after she made her decision not to offer SNC-Lavalin a deal and had made it known.

That pressure was “not illegal”, she opined, but “raised serious red flags in my view”.