Home » Americas » California Today: What to Know About Pacific Gas & Electric’s Role in the Camp Fire

California Today: What to Know About Pacific Gas & Electric’s Role in the Camp Fire

On Wednesday, about six months after California’s deadliest and most destructive wildfire rampaged through Butte County, decimating the town of Paradise and killing 85 people, state officials announced that Pacific Gas & Electric power lines had started the fire.

As my colleagues Peter Eavis and Ivan Penn reported, advocates for victims of the blaze, known as the Camp Fire, took the announcement as a kind of confirmation — and a starting gun.

“Now the day of reckoning has come,” said Frank Pitre, a lawyer for some of the victims.

The news comes as consumer advocates, lawmakers and courts are working to hold PG&E, which filed for bankruptcy protection in January, accountable for its role in devastating fires without saddling ratepayers with the bill.

Here’s what you need to get caught up:

Not exactly. PG&E, the state’s largest utility, said in February that it believed it was “probable that its equipment will be determined to be an ignition point of the 2018 Camp Fire.”

Not long after that, my colleagues reported that a live wire broke free from an almost century-old transmission tower that the company knew was beyond its useful life, near the Camp Fire’s ignition point.

That, experts and advocates said, pointed to a lax safety culture that ignored risks in favor of profit.

[Read more about the tower, and what it said about PG&E’s culture.]

When the company filed for bankruptcy protection, saying it anticipated $30 billion in wildfire liability, it tipped off a long, complicated process full of participants with competing but intertwined interests.

While consumer advocates and lawmakers have said that allowing PG&E to increase its rates to pay its wildfire costs would amount to bailing out a consistently bad actor, the company and its stakeholders have said it would be bad for everyone if the company failed.

Last month, Gov. Gavin Newsom released a plan aimed at better equipping the state to pay for what are likely to be increasing wildfire-related costs using a combination of funding sources, including potentially allowing utilities to increase rates to offset their costs — though the proposals were met with some pushback.

Survivors of the Camp Fire told me last week that they’re still struggling.

One woman I spoke to, Randi Hall, found PG&E’s bankruptcy, coupled with its recent request to raise electricity rates, galling.

Here’s what else we’re following

(We often link to sites that limit access for nonsubscribers. We appreciate your reading Times coverage, but we also encourage you to support local news if you can.) 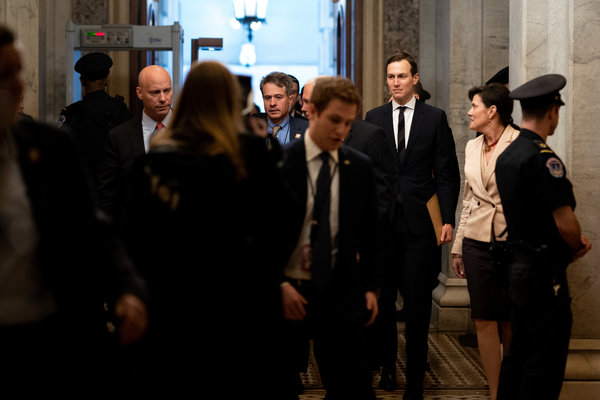 • President Trump is set to unveil a plan to overhaul the nation’s immigration system today. It would emphasize skills and educational requirements, rather than family ties. But the proposal isn’t likely to go far: “To say this is dead on arrival would be generous,” one expert said. [The New York Times]

• Also, the Department of Homeland Security has pulled federal agents — including some from the Federal Air Marshal Service — away from duties at airports, legal border crossings and elsewhere and reassigned them to help manage a surge of migrants on the southwestern border. [The New York Times]

• Senator Kamala Harris said she was open to increasing the number of justices on the Supreme Court, adding term limits and capping the number of nominees per president, saying Republicans had created a “crisis of confidence” in the highest court in the land. Her comments come as conservatives are pushing the court to overturn Roe v. Wade. [Bloomberg]

• A former janitor at Tesla’s Fremont plant will get $13 million in a settlement deal after she sued saying that she had been pinned between two vehicles while she was working in 2014. The incident, she said, caused debilitating injuries. It’s not the first time workers at the Fremont factory have had safety complaints. [LAist]

• A student from Los Angeles whose father pleaded guilty in the college admissions fraud case sued Georgetown on Wednesday, saying the school had denied him due process by threatening to expel him. Hours later, the university said it planned to dismiss him and one other student connected to the scandal. [The New York Times]

• Legislators are scrutinizing a decades-old law that requires public schoolteachers on extended sick leave to pay for their own substitutes, following outrage over one such case: A San Francisco Unified elementary teacher had to pay almost half her paycheck for a sub as she received cancer treatment. [KQED]

• Fifty years ago, when students and activists turned a junk-filled parking lot into a park in the heart of Berkeley, it set off a surreal chain of events, including a move by Ronald Reagan, the governor at the time, to send National Guard troops into the city. It was the battle over People’s Park. [East Bay Yesterday]

• Need more Curry content? Here’s some: Stephen and Seth’s parents, Sonya and Dell Curry, have mastered cheering for their sons. Just not at the same time. Now, they’re having to figure it out as the Warriors and the Trail Blazers face off with high stakes. [The New York Times]

• The San Gabriel Valley has for decades been home to massive Chinese banquet halls, where families would wait hours to gather over huge tables of dim sum. But many are shuttering. The reasons aren’t easy to explain. [The Los Angeles Times]

“Deadwood: The Movie,” the cinematic version of the critically acclaimed HBO series, debuts on May 31, and is set 10 years after the show left off.

But “Deadwood” (the series) was shot on a 22-acre Santa Clarita film studio on sets that, since the series ended, had been rendered unrecognizable by crews for other movies and shows, like “Django Unchained” and “Westworld.”

So the crew had to rebuild much of it, largely without blueprints and within four months.

You can read more about how they got the town of Deadwood ready for its big re-debut here.