Home » Americas » California Today: How a Restaurant Critic Decides Where to Eat

California Today: How a Restaurant Critic Decides Where to Eat

What does it take to be a food critic for all of California?

At first blush, it sounds like a pretty simple gig — roam around, eat delicious stuff, decide if it’s good. But then you start thinking about the mechanics. Where would you even start?

Fortunately, we have Tejal Rao, The Times’s California restaurant critic. She’s been writing other pieces and sending us weekend food recommendations for a while, but this week she posted her first official review, of Angler, a seafood restaurant in San Francisco. I asked her about her approach to the job.

Jill Cowan: California is huge and, in my not-so-unique opinion, it has the best dining in the world. How are you deciding which places to review?

Tejal Rao: It’s torture because there’s so much ground to cover: So much good food and so little time! I’m new to the state, it’s only been a couple of months, so for now I think of every single place I visit as a kind of vital lesson. Every meal is giving me context and helping to establish the ins and outs of California dining culture.

In deciding where to go, I’m always paying close attention to cooks, friends, readers, purveyors, local newspapers, menus, everything, and trying to gather as much information as possible so that I can decide how to spend my time strategically, since it’s limited. (If you want to email me a tip about where to go, I’m at [email protected])

Can you tell us about how your review process works? Are you factoring in things beyond the experience of eating at a place? (For instance, you considered how Angler’s chef is adapting to climate change.)

I don’t have a formal process. It’s all pretty messy and intuitive, but it does start with the food. With the pleasure of it, ideally, but not always. Basically I know a meal has the potential to be a review if I can draw readers’ attention to a restaurant that’s interesting and I can weave in other narratives and ideas into the criticism.

I tend to do a lot of reporting and research that maybe doesn’t make it into a story, but does help to shape it. Calling professors, interviewing fishermen, reading academic papers or old cookbooks. Yes, eating at the restaurant is at the heart of the review, but eating can’t exist in a vacuum or it’s pretty boring.

Are there any trends you’re particularly interested in? And any predictions about dining in California?

I hope more restaurants work to be, not just technically accessible, but more attentive, warm and welcoming places for diners with disabilities — with more inclusive designs and more comprehensive training for staff. And while I love reporting on the spaces that women and people of color are increasingly building for themselves, often without outside investment, I’m interested to see what happens when more major investors pay attention and fund their projects.

(A note: We often link to content on sites that limit access for nonsubscribers. We appreciate your reading Times stories, but we’d also encourage you to support local news if you can.) 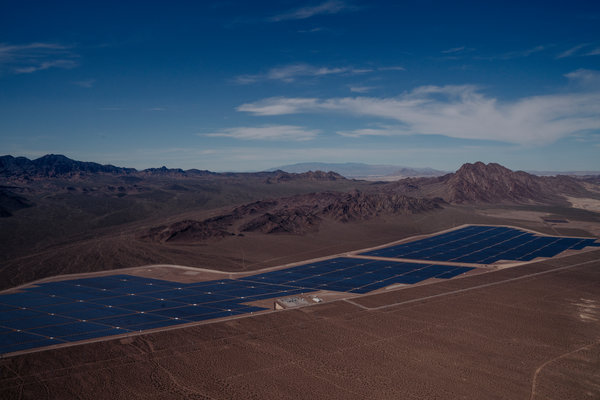 • The Pacific Gas and Electric bankruptcy will most likely be a long and complex ordeal with many ripple effects. Among them: The solar energy companies that supply the utility could suffer, which could in turn jeopardize California’s ambitious climate goals. [The New York Times]

• And see how California’s power generation changed from 2001 to 2017 in this interactive. [The New York Times]

• Yesterday, on the fourth day of the L.A. teachers’ strike, hundreds of students whose families couldn’t pay for child care poured into Virgil Middle School, while at a well-off Silver Lake elementary school, there were fewer than a dozen students. [The New York Times]

• Meet Roxana Dueñas, the Boyle Heights teacher who has become the face of the protest. [The Los Angeles Times]

• Rain caused chaos across the state. The storm triggered a 19-car pileup in the Cajon Pass and sent rocks sliding in Malibu. A falling tree killed a man in Oakland. [The Los Angeles Times]

• For the second morning in a row, an earthquake jolted awake East Bay residents. The U.S. Geological Survey estimated that it was a 3.5 magnitude. [The San Francisco Chronicle]

• Lisa Lerer, in the On Politics newsletter, wrote about Representative Nancy Pelosi’s “political flex.” (Plus an Arthur fist.) [The New York Times]

• The San Francisco Gay Men’s Chorus purchased a $9.6 million, four-story building on Valencia Street for a planned national center for L.G.B.T.Q. arts and culture. It will have space for performances, rehearsal and meetings. [KQED]

When the Rams take on the Saints on Sunday afternoon in New Orleans for the N.F.C. conference title, they’ll be led by a young quarterback named Jared Goff, who went to Cal and hails from a town called Novato.

I asked John Branch, a Pulitzer Prize-winning journalist, to send a special dispatch from this town. I’ll let him explain why:

Jared Goff’s hometown has not caught Goff Fever. I should know. I live there.

And long before Goff, 24, was competing for a Super Bowl berth, he was a kid at Pleasant Valley Elementary School and Sinaloa Middle School (the Saints, alas), the same schools as my kids.

His parents and grandparents still live here, within walking distance of each other — and me. But Novato, a suburb of about 50,000 people north of San Francisco, is a sleepy place. It does not excite easily.

The last place I saw Goff’s name here was on the menu at Finnegan’s, a downtown pub. The Goff burger (pepperjack cheese, avocado, applewood bacon, chipotle mayo and Irish poppers on a half-pound of beef) sells for $16.50, with fries. I do not know if Goff has eaten it.

When Goff was the first overall pick of the 2016 N.F.L. Draft, the marquee outside the middle school silently congratulated him. I asked my eighth grader on Wednesday if anyone at school had mentioned Goff’s name this week. She looked at me funny. No, she said.

Should a town be buzzing about a local football star? I might worry more if it was.

There are reasons Novato is not agog for Goff. One, it is chill California. We do not do “agog.” And this is mellow Marin County, which barely does “animated.”

Two, Goff never starred on the fields here. He eschewed San Marin High, his neighborhood public school, to attend Marin Catholic, a football powerhouse a couple of towns away. He later played at Cal-Berkeley, just 30 minutes away, but not many people here pay close attention to Cal football.

Three, Goff plays for the Rams, and this is 49ers and (for now) Raiders territory — although Marin County is the kind of place you are more likely to see a bumper sticker for a political cause than you are for a football team.

Maybe it will be different if Goff reaches the Super Bowl, or wins a few of them. Come to think of it, Tom Brady is from San Mateo, on the other side of San Francisco, and I have not heard much about that town going crazy for him over the years, either.

We’ll be off Monday for Martin Luther King Jr. Day. See you on Tuesday.

We were shouted at for wearing masks. This is why the situation in the US is so dire