WASHINGTON (REUTERS) – President Joe Biden went to Capitol Hill on Wednesday (July 14) to make the case for his sweeping, two-track infrastructure initiative, a day after leading Senate Democrats agreed on a US$3.5 trillion (S$4.7 trillion) plan billed as the biggest boost in decades for US families.

Biden joined fellow Democrats for a closed-door lunch where he was expected to appeal for their support and discuss strategy for passage of both a US$1.2 trillion bipartisan infrastructure deal  to rebuild America’s roads and bridges, and the larger Democratic  package that also addresses climate change and the need for stronger social services.

“We’re going to get this done,” Biden said as he walked into the meeting with Democratic senators.

Democrats face a tricky path ahead in passing the two measures through a narrowly divided Congress. They will need the support of all 50 of their senators – plus Vice-President Kamala Harris’ tie-breaking vote to pass the US$3.5 trillion over Republican opposition in the 100-seat Senate.

While some liberal Democrats on Wednesday said that they had hoped for a bigger plan, they had yet to reject the US$3.5 trillion deal.

“The need is so much greater than what we’re providing. But still, this is very significant,” Senator Mazie Hirono told reporters.

Democratic Senator Joe Manchin, an outspoken moderate, said,“I know we have needs in our country and we have responsibilities and we have obligations. But we have financial responsibility… We have to pay for all this.”

When the agreement was announced late on Tuesday, Democratic Senator Mark Warner, a moderate member of the Senate Budget Committee, said the US$3.5 trillion initiative would be fully paid for but he did not provide specifics.

Senate Republican Leader Mitch McConnell wasted no time in going on the attack, however.

“With inflation raging… (the Democrats’ budget plan) is wildly, wildly out of proportion to what the country needs right now,” he said.

US consumer prices rose by the most in 13 years  in June amid supply constraints and a rebound in the costs of travel-related services from pandemic-depressed levels as the economic recovery gathered momentum, according to data released on Tuesday.

Republican Senator Rob Portman dismissed any notion that the level of spending being proposed would sink prospects for passage of the smaller, bipartisan Bill that a group he leads is trying to unveil in coming days.

Even if they pass the Senate, both measures would also need to make it through the House of Representatives before going to Biden’s desk for his signing.

The US$3.5 trillion plan agreed to by senior Democrats and White House negotiators includes a significant expansion of the Medicare healthcare programme for the elderly – a top goal of Senate Budget Committee chairman Bernie Sanders, who joined Democratic Senate Majority Leader Chuck Schumer in unveiling the deal on Tuesday night.

Sanders’ backing could help build support among progressive Democrats, some of whom had pushed for a bigger package.

Senate Republicans, who assail Biden’s larger spending ambitions as wasteful and unnecessary, have voiced qualified support for the narrower US$1.2 trillion plan, which includes US$600 billion in new spending for roads, bridges, rail, public transit, water and broadband systems.

The Senate’s 50 Republicans are not expected to back the broader infrastructure effort, which would undo Republican then-President Donald Trump’s 2017 tax cuts by raising taxes on US corporations and wealthy individuals.

Asked about the Democrats’ deal on Wednesday, Republican Senator Mitt Romney said in a brief interview in the Capitol, it was “stunning. It’s a shocking figure, particularly at a time when the economy is already heating. It seems that our Democrat friends may have lost their bearings.” 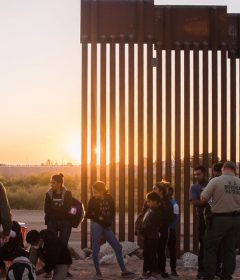 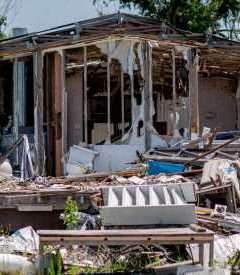