Home » Americas » Before ‘I Have a Dream,’ Martin Luther King Almost Died. This Man Saved Him.

Before ‘I Have a Dream,’ Martin Luther King Almost Died. This Man Saved Him.

The bar in Showman’s Jazz Club, a Harlem destination for visitors from just down the block to Japan and back, stretched from the front door to the stage. The owner, Al Howard, liked to sit at the curve near the entrance.

John Miller, a regular at the club and a deputy commissioner in the Police Department, knew the habit well. “Typical detective thing,” he recalled. “So he could see everyone going in and going out.”

The club’s owner had in fact been a police detective, and the two men became friends. And so, decades later, Mr. Miller was surprised to hear one particular story about Mr. Howard’s years on the force. He wondered if it indeed could be true and, if so, found it shocking that it was not more widely known. So, a couple of years ago, very late one Saturday night — actually, already Sunday morning — after the crowd had thinned and the band had packed up, Mr. Miller took a bar stool beside the club owner and just came out and asked.

“I heard this story that you saved Martin Luther King,” Mr. Miller said.

What happened on Sept. 20, 1958, in a Harlem department store is briefly recounted in history books and old newspaper clippings that dutifully tell the who, what, when and where of a tragedy averted. But lesser known, because it was not in the nature of the men involved to broadcast it, are the snap decisions of a young officer and his partner, dropped into a scene of bedlam and confusion, that would change the course of American history.

That night in the bar, Mr. Howard, then 91, drew closer, and told his story. 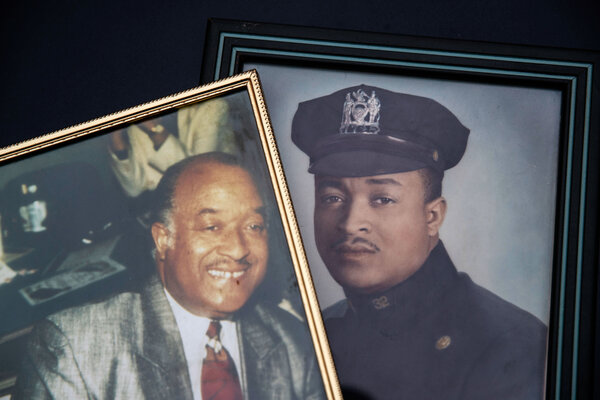 It was a warm and cloudless Saturday afternoon. Officer Howard, 31 years old and on the job three years, was driving a patrol car with a rookie he’d just met that day, Officer Philip Romano. A call came over the radio: There was a disturbance at Blumstein’s department store in Harlem.

They arrived to find chaos on the second floor. At its center, in a dark suit and tie and sitting still as stone in a chair, was the Rev. Dr. Martin Luther King Jr., then 29. There was a letter opener jutting out of his chest. He had been signing copies of his book “Stride Toward Freedom,” about the Montgomery bus boycott, when a young woman approached and stabbed him.

An advertising executive for The Amsterdam News, a prominent Black newspaper, grabbed the woman and restrained her until a security officer took over. Stunned local leaders and politicians looked on as another woman, fearing for Dr. King’s life, reached to pull the blade out. “She was hysterical,” Officer Romano said later. The officers, knowing that the blade might have been saving Dr. King from bleeding to death, stopped her in time.

“In those days we didn’t have walkie-talkies,” Officer Howard said years later in an interview for the internal N.Y.P.D. magazine, Spring 3100. “The only radio we had was the one in the patrol car. Once we left that, our communication was cut off. We were entirely on our own, and believe me, it was some predicament.”

He went into greater detail that night in Showman’s. “I said, ‘Take me to a telephone,’” Mr. Howard recounted to Mr. Miller. “I called Harlem Hospital. I said: ‘Send an ambulance. I have this man who’s got a knife sticking out of his chest. What do we do?’ The doctor came on the phone and said: ‘Don’t take it out. We’ll send an ambulance right away.’”

The two patrolmen hatched a fast plan, and Officer Howard turned to the crowd. The sight of a Black police officer in Harlem was no longer a novelty — the traditionally Irish-American force would have some 1,200 Black officers by 1960 — but Officer Howard nonetheless stood out.

“He had a mild face,” the New York Newsday columnist Jimmy Breslin wrote of him in 1993, “but at the same time a face that caused people, upon looking at it even for a moment, to stop what they were doing and behave.”

Officer Howard announced that Dr. King would be taken out through the front door on 125th Street and asked that a path be cleared. It worked. He himself stayed out front, as if waiting, while Officer Romano and others carried Dr. King, still seated in his chair, to an ambulance out back, on 124th Street. “Rather than try to push inside, a couple of thousand excited people remained out on the street to watch,” Mr. Breslin wrote.

Dr. King was taken to Harlem Hospital, where a team of doctors worked to pull the blade from his chest. Outside the operating room, 40 people offered to give blood. A doctor told reporters that the blade “impinged on the aorta, a blood vessel near the heart,” and that a puncture would have caused “instant death.”

The police arrested Izola Ware Curry, a mentally ill woman who believed Dr. King and others were following her, and charged her with the stabbing.

Dr. King spent weeks in New York City recovering. He addressed reporters from Harlem Hospital: “First let me say that I feel no ill will toward Mrs. Izola Curry and know that thoughtful people will do all in their power to see that she gets the help she apparently needs if she is to become a free and constructive member of society.”

He blamed larger societal ills: “A climate of hatred and bitterness so permeates areas of our nation that inevitably deeds of extreme violence must erupt.”

He later wrote a letter to thank the police. “I have long been aware of the meaning of the phrase ‘New York’s finest’ when applied to members of the N.Y. Police Department,” he wrote. “From the moment of my unfortunate accident, I have concurred, wholeheartedly, in that appellation. There are none finer.”

Officer Howard rose in the department, though not because of his actions at Blumstein’s. The earliest commendation in his personnel file would arrive two months later, for arresting a man with a gun. He worked bigger cases later, helping in the hunt for the serial killer Son of Sam and with a drug squad doing extensive heroin investigations in the Bronx.

He told Mr. Miller that years after the stabbing, he walked into a sandwich shop in Harlem and saw Dr. King sitting with three other people at a table. “I was looking at him, and he was looking at me,” he recalled, “so I walked across the store. I asked, ‘Do you remember me?’ He said: ‘I know I know you. I can’t remember from where.’”

Dr. King’s career and stature soared over the decade that followed that afternoon at Blumstein’s. During a speech in Memphis in 1968, he would reflect on that day.

“You know, several years ago I was in New York City, autographing the first book that I had written. And while sitting there autographing books, a demented Black woman came up,” he said. “The next minute I felt something beating on my chest. Before I knew it I had been stabbed by this demented woman.”

He continued: “The X-rays revealed that the tip of the blade was on the edge of my aorta, the main artery. And once that’s punctured, you’re drowned in your own blood, that’s the end of you.

“It came out in The New York Times the next morning that if I had merely sneezed, I would have died.” He repeated the phrase over and over, “If I had sneezed,” while naming the Civil Rights milestones he had accomplished since then — the lunch-counter sit-ins, the march on Selma, the “I Have a Dream” speech — and then concluded, “I’m so happy that I didn’t sneeze.”

Officer Howard reacted to the assassination with the same shock and sadness as countless others. But he held his own story close. “He was old police,” said his son, Al Howard Jr., 72. “They did their work and they came home and they were father, husband.”

After Officer Howard retired, he took over Showman’s. “If you wanted to hear the best jazz in the world, you could come to Showman’s and not pay a cover,” his son said.

The club drew many from the neighborhood, said the Rev. Robert Royal, a Baptist minister and himself a regular. “‘Bob Royal, you’re a preacher,’” he recalled Mr. Howard telling him once in the club. “‘How come I see you sitting on a bar stool night after night?’ I said, ‘Well, Al, I’m undercover for Jesus.’”

The coronavirus shut down Showman’s in March. Mr. Howard stayed home and kept busy, but finally had enough of lockdown. He and Mona Lopez, his companion and partner at Showman’s, were regular visitors to Las Vegas, and they flew there in September. On the way home the following week, Mr. Howard fell ill with what appeared to be a cold but was actually the coronavirus. He died several days later of Covid-19. He was 93.

His funeral on Oct. 27 at J. Foster Phillips Funeral Home in Jamaica, Queens, was limited in size by social-distance restrictions, but mourners included people from both sides of his working life — the Police Department and the club. His grandson Malik Howard read from an obituary that listed his many accomplishments. Tucked among them: “He helped save Martin Luther King Jr.’s life.”

That night at the bar in 2018, as Mr. Howard’s story reached its end, the place had emptied. Mr. Miller was struck by what would seem to be the ultimate futility of his friend’s actions in 1958.

“I mentioned it’s a shame he was killed a few years later,” Mr. Miller said. “You can save a guy’s life, and still, the life isn’t saved.”

“Al made the point that in that span of years that he didn’t die by being stabbed,” Mr. Miller said, “he went on to do the most important works.”