In midst of the calamity, the country’s president, Evo Morales, suspended his re-election campaign on Sunday and, in a shift, welcomed foreign aid.

“Whatever cooperation is welcome, whether it comes from international organizations, celebrities or from the presidents who offered to help,” Mr. Morales said in the city of Cochabamba, where he had been campaigning for a fourth term. Bolivian officials, he vowed, would “dedicate ourselves” to the problem.

Fires, some of them set by farmers trying to clear brush, are a regular feature of the dry season in northern South America. But this year has been different.

Blazes in Bolivia’s Chiquitano forest and in the Amazon region of Brazil have been far larger, and more widespread, than in previous seasons. That has aroused international concern and, in the case of Brazil, outrage at President Jair Bolsonaro’s dismissal of the blazes’ seriousness.

Mr. Morales said he gotten calls from the presidents of Spain, Chile and Paraguay in recent days with offers of help. And on Sunday, as the Group of 7 met in France, President Emmanuel Macron said the world’s seven richest democracies were putting together an aid package for the South American nations affected by the fires. 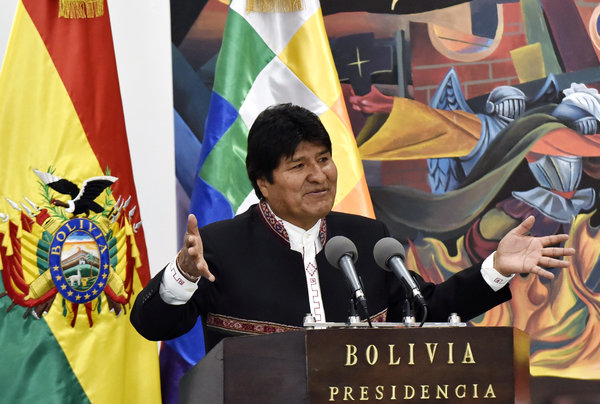 Recovery will not be quick.

It may take up to 200 years for the forests in Bolivia to heal, said Miguel Crespo, head of nonprofit environmental group Probioma. “I’ve never seen an environmental tragedy on this scale,” he said.

At first, Mr. Morales tried to play down the fires, which have been spreading across four states over the past month. Just hours before he suspended his campaign on Sunday, the president’s chief of staff, Juan Quintana, rejected the need for foreign firefighting aid.

Bolivia, he told local radio stations, did not need “to extend its hands to beg.”

But in a country already been galvanized by Mr. Morales’ controversial re-election bid, the reaction to the fires has taken on strong political overtones. Bolivia’s Constitution barred Mr. Morales from running again, and he lost a referendum that would have let him do so. When he turned to the courts to throw out the term limits, mass protests followed.

Now, political opponents and various sectors of the population are attacking Mr. Morales over his slow response to the fires.

In Roboré, a smoke-choked town in eastern Bolivia, hundreds of angry residents in smoke masks blockaded Mr. Quintana, the chief of staff, and Bolivia’s defense minister in a cafeteria at a military base on Saturday, demanding international aid. And in t Santa Cruz de la Sierra, Bolivia’s largest city, residents called a demonstration Sunday night to demand that the government declare a state of emergency.

By Saturday, the fires had destroyed 2.5 million acres of forestland in the eastern state of Santa Cruz, double the area burned a week ago. They were approaching the city of Santa Cruz.

Environmental experts say the fires are threatening about 500 types of animals, including jaguars, tapirs, and 35 endangered species, some of which are found nowhere else.

Bolivia’s business chamber predicted that the fires will halve the country’s gross domestic product this year; it has been projected by the International Monetary Fund to grow by 4 percent. The flames have already left about 300,000 cows without pasture, the chamber said.

Mr. Morales’s opponents attribute the wildfires on the government’s landmark campaign to hand out free land to peasants and open up new areas to agribusiness.

Those policies won Mr. Morales broad support among the poor while placating the country’s conservative business groups. But they came at the cost of leaving swaths of previously virgin jungle and bushland exposed to uncontrolled slash-and-burn farming, critics say.

Political analysts said Mr. Morales’ response was partly driven by a desire to maintain the votes of core supporters among small-scale indigenous farmers, who often lack the machinery and capital to clear the land without resorting to fire.

“If the small families don’t burn their plots, how are they going to get by?” Mr. Morales said on the campaign trail Tuesday. “The small producer has just half a hectare for yuca and a hectare for corn to eat. That’s their situation.”

After initially ignoring the fires, the president last week dispatched soldiers and three helicopters to fight fires in an area the size of Oregon. In the past few days, he stepped up efforts, hiring the world’s largest firefighting aircraft, the Boeing SuperTanker 747, from the United States to help.

The bulk of the firefighting up to now, however, has mostly been carried out by local volunteers and hastily assembled students from Santa Cruz.

In his 13 years in office, Mr. Morales has struggled to balance his professed environmental priorities with the political need to produce quick economic results.

Once in office, he turned his homespun environmental awareness, drawn from indigenous Bolivians’ connection to nature, into a core part of his political image. In 2010, he passed the world’s first law giving rights to all living things.

His economic policies, however, have often clashed with the harmonious existence he preaches, critics point out. His government passed at least four laws and six decrees expanding agricultural use of fragile forested areas since 2013, for example.

“The government has detonated an environmental disaster,” said Mr. Crespo, the conservationist. “In large part, this tragedy is the result of the state’s populism and development vision based on agribusiness.”

US presidential debate: Biden and Trump clash on coronavirus and healthcare