Home » Americas » As a Bitter Election Ends, 26 Americans Look to the Future

As a Bitter Election Ends, 26 Americans Look to the Future

Election night played out as one more anxious chapter in a year characterized by bitter partisan rancor and successive national crises.

As states flickered between blue and red on projection maps, and as vote-counting extended through the week, tensions only rose. In sheer numbers, more people voted in 2020 than ever before, but the results seemed to crystallize the deep divisions in the country — on the virus, the economy, issues of race, and even how to properly count the vote.

For anyone seeking to understand the will of the people, the past week offered little clarity. The only common ground, it seemed, was the sizable majority who told exit polls they felt the country was heading in the wrong direction.

And yet. The vote is fundamentally an instrument of optimism, a chance to shape the future of your community and your country. On Tuesday and in the days leading up to the election, Americans waited in line in record numbers to cast their vote.

We talked to them about their hopes for the country — whatever the outcome of the election. What did they want for America? They spoke about equality, opportunity and coming together as a nation. Here are some of their answers. 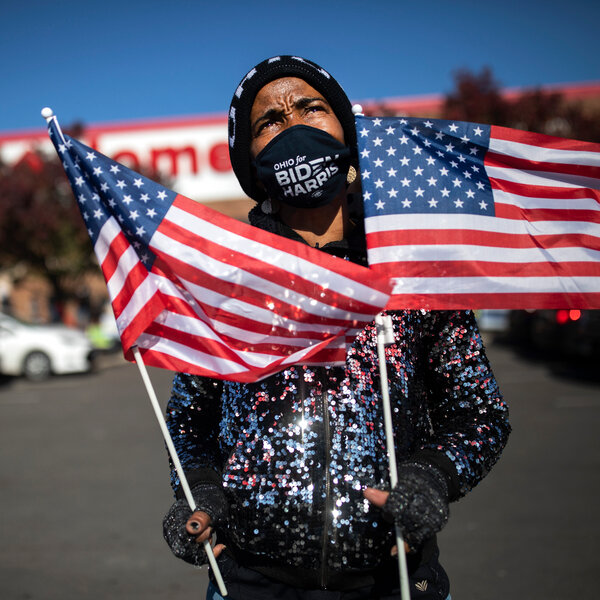 “My hope for America is all about the children. They need to get back to school. They are our future. They need to see a more respectful and responsible leader.”

“I’d just like to see us come back together, you know? And be one people and get along together.”

“I just want the best for America. I want it to be in the hands of a good person who can lead the country, that can get us what we need.”

“We need equality. That’s the thing over all. Everybody bickers. It’s you, it’s us, it’s them. They’re doing this, they’re doing that. Everybody needs to take responsibility for their actions.”

“My hope is that we find our humanity again, that we find a way to be kind to one another, and have empathy in general. I’m in a hopeless place right now in terms of what’s happened to this country, and that’s a lot coming from a Black person. I’ve never seen this total lack of respect for differences.”

“My hope for the country is freedom for faith, peace and good will to all men. My hope is that abortion is abolished in the future.”

“I want to make America great again, but not at the cost of lives and jobs, because I am a self-employed small business owner and I have been affected by the pandemic. It’s hitting home now. I want America to be great again, no matter who wins. This is not us.”

“I hope people see that the medical leaders that are trying to lead us are trying to help us through something absolutely horrible. My dad is a physician, and I’m going into medicine. It’s really disheartening when people have stopped listening to the people that try and keep us healthy and safe.”

“I want to see the virus beat as soon as possible. I want to see the troops all come home. I hate the players kneeling for the national anthem. They don’t respect the flag. I am very proud of my country and my service.”

“I’m tired of Covid-19, so I hope the country can move past. This has been the worst time for us in our lives, and I want to see that get better and the economy get better.”

“I want equality, and I want women to be just as powerful as how they portray men. They downsize women a lot. I was a firefighter for three years, and I got a lot of crap because I was a female and I did it just as good as they did. So what I want to see is equality.”

“I want the people to have harmony and love for one another in the country. I’d like to see the people get back to work, take care of their families and everything.”

“It’s gotten harder and harder to live in this country. These essential workers that we need — not just hospital workers but hotel employees, restaurant employees — they can’t afford to live downtown anymore. When I was a kid, everybody lived downtown, every race — everybody lived together. There’s no diversification anymore.”

“For me, a big thing is being able to respect others’ viewpoints without bashing them. I hope as a country we will come out of this election and realize that even though we may not be happy with the outcome, it’s four years and it’s your civic duty to vote, and you get to do it again in four years and make your voice heard again.”

Phyllis: “I want peace within and peace outside. I want the country to come back together as caring, loving and concerned citizens, where we really live in a way where we can support each other.”

Les: “I would like for us to be sane again.”

“I want this economy to grow, to be able to support the undocumented, for the Latinos to be able to unite with every other race and the whole country to be able to come together and provide a better future for our future generations.”

“My hope is that we all come together and there isn’t the toxicity; that somehow we realize we have more in common than we have different. I’ve been fortunate to live in several different states throughout my life, and the one common denominator is that we’re all good people at heart — at least I would hope so.”

“I want America to not see us as animals, you feel me? I want everybody, when they look at me — I don’t want them looking at me just as a Black man. I want them to look at me as an individual.”

“I really want my kids to go back to school safely. Personally, my No. 1 concern right now is the Covid epidemic, and I hope that it can be under control in the coming year. Also, I’m American Indian, I’m Navajo, and I hope that in the next few years Native Americans will have a bigger seat at the table with governments, especially our federal government, which has not been ideal in the last four years.”

“We have more hate in this country than we need. I’d like to do my part to get rid of some of that. But I don’t know where to start.”