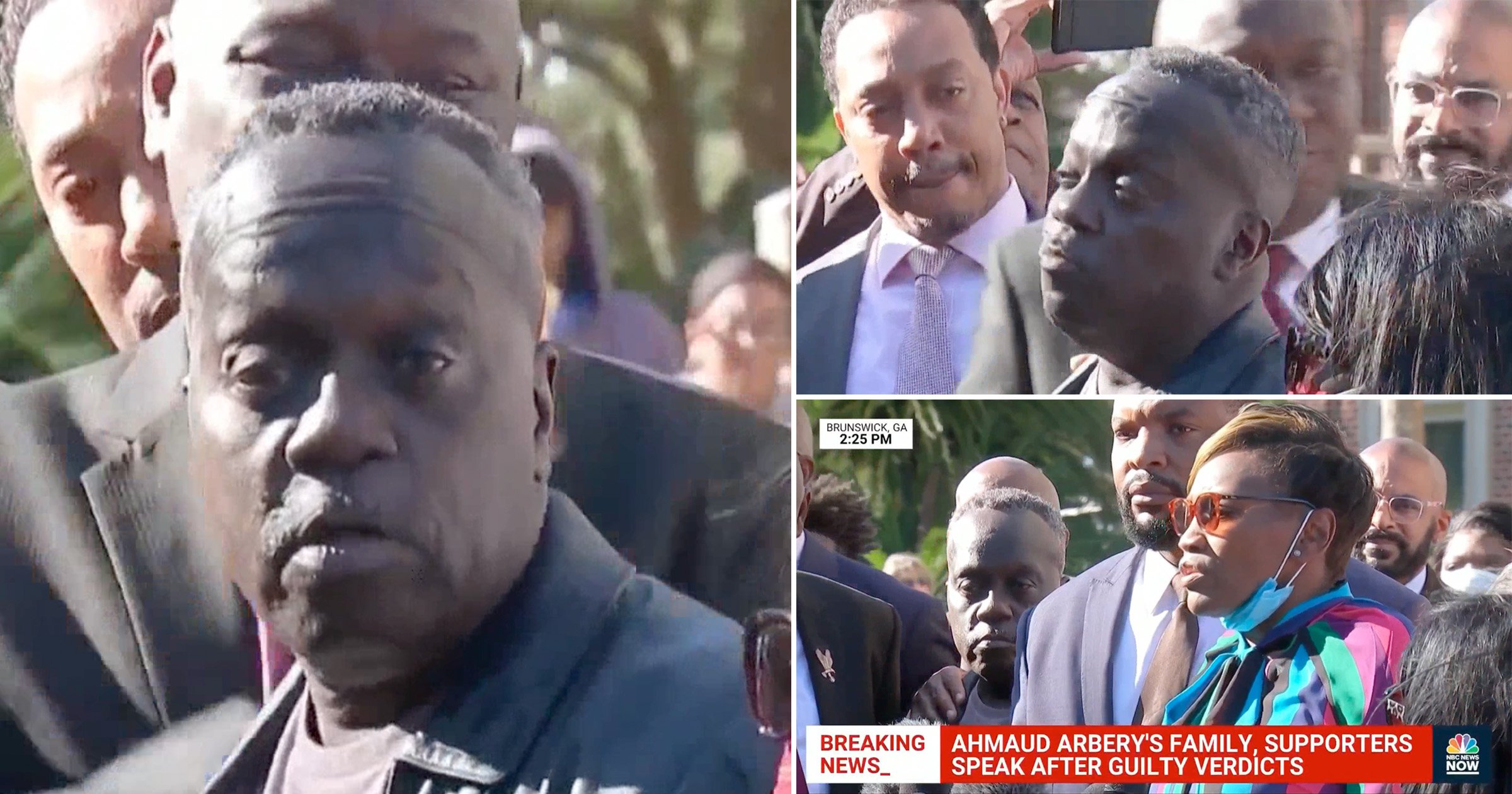 Ahmaud Arbery’s father praised the murder convictions of the three white men who gunned down his son last year, saying, ‘We conquered that lynch mob’.

And Ahmaud’s mother, Wanda Cooper-Jones, sobbed aloud and said, ‘Oh!’ as the first guilty verdict was read. Cooper-Jones’ head sunk into her chest as she cried alongside civil rights activist Reverend Al Sharpton, who held her hand.

Their vocal reactions prompted Walmsley to say: ‘I ask that whoever just made an outburst be removed from the court, please. If you feel like you need to make a comment regarding the verdict, I ask that you step outside the courtroom now.’

As Marcus was led out of the court due to his outburst, he said, ‘It’s been a long time coming’, CNN reported.

‘Love everybody. All human beings need to be treated equally,’ he said outside the courthouse. ‘Today is a good day.’

The father said he felt the guilty verdicts were a win for his son — and also for justice everywhere.

‘For real, all lives matter,’ he said. ‘Not just Black children. We don’t want to see nobody go through this. I wouldn’t want to see no daddy watch their kid get lynched and shot down like that.’

Marcus added: ‘It’s all our problem. So hey, let’s keep fighting. Let’s keep doing and making this a better place for all human beings.’

Outside the courthouse, Ahmaud’s mother admitted she didn’t know this day would come.

‘To tell you the truth, I never saw this day back in 2020. I never thought this day would come. But God is good. I just wanted to tell everybody thank you, thank you for all those who marched and those who prayed,’ she told reporters.

The mother added that he will now be able to rest in peace.

Three white men — Travis McMichael, who fatally shot Ahmaud, his father Greg McMichael, and their neighbor William ‘Roddie’ Bryan, who captured the killing on video — were all convicted of murder on Wednesday.

A jury came out with a verdict after about ten hours of deliberations in the trial of the three white men charged with chasing and killing Ahmaud, 25, who was jogging through their Brunswick, Georgia neighborhood on February 23, 2020.

President Joe Biden said the guilty verdicts ensure ‘that those who committed this horrible crime will be punished’.

‘While the guilty verdict reflects our justice system doing its job, that alone is not enough,’ Biden stated. ‘Instead, we must recommit ourselves to building a future of unity and shared strength, where no one fears violence because of the color of their skin.’

Harris also slammed the defense for their unethical tactics and praised the jury for delivering justice.

‘The defense counsel chose to set a tone that cast the attendance of ministers at the trial as intimidation and dehumanized a young black man with racist tropes,’ Harris said. ‘The jury arrived at its verdicts despite these tactics.’

Reverend Al Sharpton, who sat alongside Ahmaud’s parents throughout the trial, applauded the activists for their support.

‘All of us, this is a day white and black activists showed we could unite and beat the lynch mob that killed Ahmaud,’ Sharpton said outside the courthouse.

‘And though I never say this often, I must say, we want to thank the prosecutors. They stood and fought for this family,’ he added.

He also noted that despite today’s triumph, there will still be an empty chair at the Arbery family’s Thanksgiving celebration on Thursday.

‘Tomorrow, in all our joy today, there will be an empty chair at Wanda’s table. Ahmaud will not be at Thanksgiving tomorrow. But she can look at that chair and say to Ahmaud, “I fought a good fight and I got you some justice”,’ the reverend said.

‘We can’t fill that chair for you, Wanda, but we can say that you are a mother above all mothers. You fought for your son.’

Civil rights attorney Ben Crump, who represents Ahmaud’s father, described the jury’s verdict as ‘progress’ toward equal justice but cautioned that ‘we are nowhere close to the finish line’.

US to declare diplomatic boycott of Beijing Olympics: Media