After Aurora Shooting, ‘Cross Man’ Builds 5 for His Community

Since the day 13 people were killed at Columbine High School in 1999, a carpenter from Illinois has hopped in his pickup truck to deliver 26,274 handmade wooden memorials — mostly crosses, and sometimes Stars of David or crescent moons — across the country, unifying grieving communities after mass shootings, natural disasters and other tragedies.

But this week the carpenter, Greg Zanis, did not have to drive far. After a former employee at an industrial warehouse fatally shot five workers and injured five police officers in suburban Chicago, he ministered to his neighbors by setting up five more crosses.

On Friday afternoon, Mr. Zanis, whom some refer to as the “Cross Man,” watched dozens of police cars drive past the house where he lives with his wife and three of his children in Aurora, Ill. His daughter informed him they were responding to an active shooter.

“It felt like someone had hit me upside the head,” Mr. Zanis said in a phone interview. “I didn’t see it coming.”

Although Mr. Zanis, 68, and his nonprofit, Crosses for Losses, have been profiled by major television networks and newspapers, he prefers going “in and out” of communities as anonymously as possible. 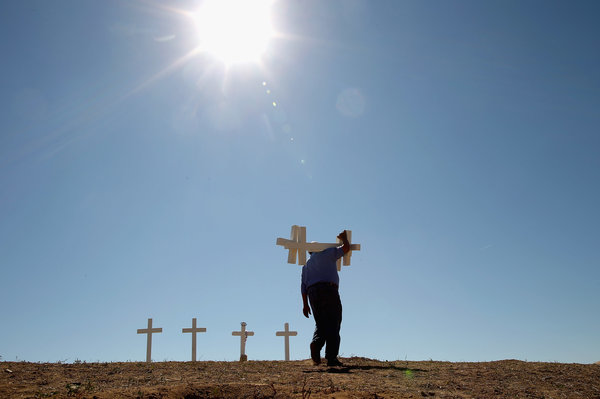 “I can leave Parkland and cry for two days,” he said about creating a makeshift memorial for the 17 people who died in last year’s shooting at Marjory Stoneman Douglas High School in Florida. A few weeks earlier his daughter had died of a drug overdose.

In November, Mr. Zanis said, he drove about 4,200 miles in a week to deliver crosses and Stars of David for victims of the wildfires in Paradise, Calif. He has also driven to Pittsburgh after 11 worshipers were killed at a synagogue; to Sandy Hook, Conn., after 26 children and staff members were shot dead; to Las Vegas after 58 people were killed at a music festival; to New York City after eight died in a vehicle attack; and to Annapolis, Md., where five people lost their lives in a newsroom. Many nights, he slept in his truck.

But the tragedy in Aurora is “even more complicated,” he said.

In the days following the recent shooting, a parade of people have come by Mr. Zanis’s home. Early Sunday morning, a police officer parked in his driveway to grieve for two hours, he said. Television crews hoping to get Mr. Zanis on camera idled out front.

Sunday afternoon, as a light snow fell, hundreds of people attended a vigil that Mr. Zanis helped organize for the injured police officers and the workers who died at the warehouse.

One Aurora resident, Tracy O’Horo, 46, said she wanted to let those affected by the shooting “know that we’re here for them and we’re lifting them up in prayer.”

Roseanne Hoban, 51, of Montgomery, Ill., became emotional as she spoke. “This violence has to stop,” she said. “We just need to start loving one another.”

The five wooden crosses Mr. Zanis made for the Aurora victims — he works with victims’ groups and reads obituaries to determine their faiths — were nearly buried under plastic-wrapped floral bouquets, plush teddy bears, candles and heart-shaped balloons.

Each four-foot-tall memorial is made of “furniture-quality” wood; weighs about 30 pounds; has a signature big, red heart and a photo of the victim; and is marked with a serial number, date of death and location, information that Mr. Zanis has meticulously logged in 75 notebooks. Mr. Zanis also notes the name and phone number of the victims’ families so he can stay in touch.

Mr. Zanis began making crosses in the months after he found his father-in-law dead in a pool of blood in 1996, which was a “life-changer.” He said he lost 50 pounds and joined a support group.

The Chicago Tribune then wrote an article that said Mr. Zanis would make and deliver a memorial for anyone who asked, unknowingly opening a hotline for his services.

“People feel free to call me, no matter what national tragedy happens,” he said.

Mr. Zanis said he mostly pays for the memorials out of his own pocket, although he has received donations in the past.

When asked why he has been compelled to do this work, Mr. Zanis was matter-of-fact.

“I’m not a gun issue guy. I’m not a church guy,” he said. “There’s no interest here other than helping people remember.”