Home » Africa » Zimbabwe: What's next for MDC after Morgan Tsvangirai?

Zimbabwe: What's next for MDC after Morgan Tsvangirai? 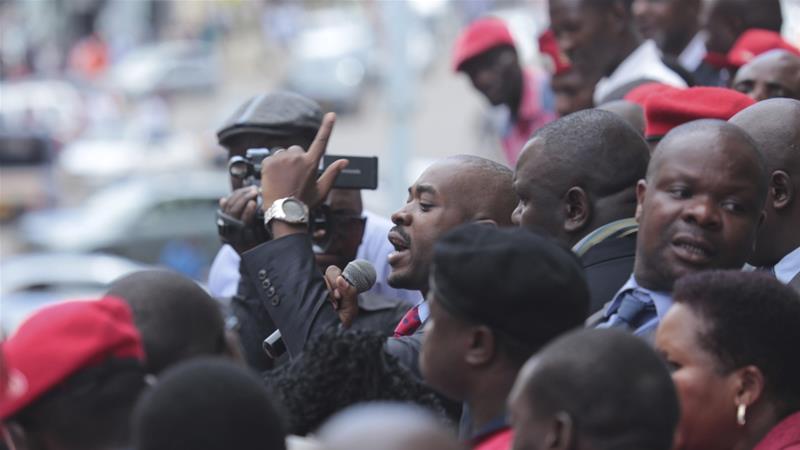 The death of Morgan Tsvangirai, Zimbabwe’s totemic opposition leader, has left supporters in mourning – and his party having to navigate a precarious leadership transition ahead of landmark presidential elections.

In Tsvangirai’s place, the Movement for Democratic Change (MDC) installed on Thursday Nelson Chamisa as its acting president for 12 months.

This means the 40-year old is expected to be the party’s presidential candidate when elections take place later in 2018.

Chamisa told supporters gathered at the MDC’s headquarters in Harare, Zimbabwe’s capital, that he was confident of a successful campaign, despite the death of a party “icon”.

“We have lost a doyen of democracy,” Chamisa said.

“We are just four months away from an election and we have lost a commander but what I can tell you is that we do not have a [leadership] crisis … We will win this election.”

A powerful public speaker that led the opposition for nearly two decades, Tsvangirai, 65, passed away on Wednesday after a protracted battle with colon cancer.

His death came fewer than 90 days after Emmerson Mnangagwa’s elevation to Zimbabwe’s presidency and, crucially, within “four to five” months of an expected national election.

Mnangagwa, the leader of the ruling ZANU-PF party, was sworn in as president in November 2017 following the forced resignation of former ally and long-time ruler Robert Mugabe, who had been in power since Zimbabwe’s independence in 1980.

The changes, profound and sudden, have reshaped the political landscape in Zimbabwe, Alex Magaisa, a Zimbabwean academic and former adviser to Tsvangirai, told Al Jazeera.

“The next election will be new compared to previous votes in the last 20 years because the two most important characters, Tsvangirai and Mugabe, won’t be on the ballot paper,” Magaisa said.

“We are entering uncharted territory.”

A former chairperson of the MDC Youth Assembly, Chamisa is widely seen as one of the brightest stars within his party.

But outside of MDC circles, he is one of many who have been overshadowed by Tsvangirai’s towering figure, according to Sue Onslow, a specialist in African history at The Institute of Commonwealth Studies in London.

“The problem in terms of the visibility of the MDC going into this year’s elections is that Morgan Tsvangirai genuinely had the national profile – and his successors do not in anything like the same way,” she told Al Jazeera.

“They have lost someone who was an enormously courageous man, the figurehead in opposing a one-party state structure.”

In comparison, the ZANU-PF party appears to be attempting to broaden its appeal under Mnangagwa, who has pledged to deliver a series of economic reforms to turn around Zimbabwe’s ailing economy and fight corruption.

Approximately 2.3 million Zimbabweans live in extreme poverty, according to the World Bank, around 14 percent of the country’s total population.

Chamisa could, however, have a significant advantage on the campaign trail.

“He’s youthful, and therefore has a massive appeal with young people,” Magaisa said, noting that Chamisa is 35 years younger than Mnangagwa, his main opponent.

“He’s also quite charismatic, and has the ability to connect with ordinary people much in the same way as Morgan [Tsvangirai].”

The loss of a founding father

With a ballot on the horizon, the MDC has little time to manage the transition as it faces up to the challenge of prizing votes and overturning 37 years of ZANU-PF rule.

It will be a tall order, said Michael Bratton, a professor of political science and African studies at Michigan State University.

“Tsvangirai was a unifying factor and the only charismatic leader who could carry the opposition to an electoral victory, as he did in 2008 – even though he was cheated out of it,” he told Al Jazeera.

Tsvangirai topped the first round of a March 2008 presidential election, winning 47.8 percent of the vote compared with Mugabe’s 43.2 percent share, according to the Zimbabwe Electoral Commission.

However, after failing to win the absolute majority required to assume the presidency, Tsvangirai withdrew from a second ballot in June saying Mugabe had sanctioned security forces to intimidate opponents and influence the vote, leaving Mugabe to win a one-horse race.

According to Amnesty International, at least 200 people were killed, more than 9,000 injured and tens of thousands displaced by government forces in fewer than four months between the two polls.

A week before his death, Tsvangirai, who founded the MDC in 1999, reportedly appointed Chamisa as the party’s acting president.

Chamisa was one of three party vice-presidents under Tsvangirai, alongside Elias Mudzuri and Thokozani Khupe.

Both Khupe and Mudzuri have been openly critical of Chamisa in recent days. They also did not attend MDC’s meeting on Thursday, amid speculation over a potential split.

“The manner in which the succession issue has been handled is claimed to have left the party divided,” Magaisa said.

“There is an impression that it’s almost as if a power grab has taken place, because there are three factions in the party led by the three [former] vice-presidents.”

Tsvangirai’s death has revealed, rather than caused, the now apparent party divides, according to Bratton, the university professor.

“The opposition was already, prior to Tsvangirai’s death, in a weaker state than it had been for a long time and due to his death it will become even more fragmented,” he said.

Onslow agreed, saying such a scenario would pose an immediate threat to the MDC’s chance of winning the upcoming elections.

“I don’t see the opposition getting its house in order, in order to fight a coherent and cohesive campaign,” she added.

The MDC’s efforts may also be hampered by a shortage of funds and weaker grassroots organisation compared with a resurgent ZANU-PF, according to Onslow.

“We focus too much on a binary political landscape in Zimbabwe, [but] it’s not that – ZANU-PF is dominant,” she said.

ZANU-PF currently holds 57 of 80 seats in Zimbabwe’s Senate, and 160 of 210 seats in the country’s lower chamber, the House of Assembly.

A chance to challenge

But, according to Magaisa, the MDC may yet prove capable of electoral victory, taking advantage of widespread grievances over the state of Zimbabwe’s economy and challenges over providing basic services.

The United Nations Human Development Index – which measures health, education and economic performance – ranks Zimbabwe 154th out of 188 countries, placing it in the lowest category of development.

In order to deliver change, the MDC must first win the election by retaining its core supporters – previously bounded by Tsvangirai’s leadership – and galvanising support among Zimbabwe’s youth, Magaisa said.

“The MDC is still a force to be reckoned with … I don’t think it will be a walk over for Mnangagwa,” he added, arguing that ZANU-PF’s popularity “is being exaggerated”.

“There is a lot of hatred over … what [ZANU-PF] has done over the years, people have not forgotten that.

“Especially if people are free to vote the way that they want, ZANU-PF may be in for a big surprise.”