Home » Africa » What is it like to report a terror attack?

What is it like to report a terror attack? 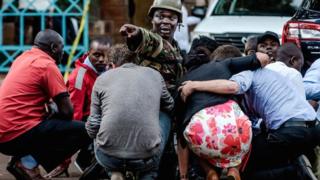 In our series of letters from African journalists, Waihiga Mwaura, a news anchor for Citizen TV in Kenya, looks back on a traumatic week following the deadly hotel siege in Nairobi.

It all began with a phone call from my wife.

I was in a meeting at work, but something told me that this was urgent, so I stepped away from my colleagues and picked up the phone.

Her tone immediately set me on edge and she was speaking faster than she usually does.

With no time for the usual pleasantries she asked if I was OK.

I responded in the affirmative before she quickly told me that something terrible was happening at the bank compound she was in along Riverside Drive, in the Westlands neighbourhood of the capital, Nairobi.

She said it had been locked down, with no-one allowed to leave or enter the premises.

‘It was a very terrifying moment’

Before I could ask her why, I heard loud sounds behind her, multiple gunshot rounds and a lot of commotion.

Turns out that, at that exact moment, about five al-Shabab militants were attacking the complex at 14 Riverside – the compound housing a hotel and offices – just down the road from my wife’s location at time.

It was a very terrifying moment and I was unsure what to do. I put her on hold and rushed to the newsroom to find out exactly what was happening.

I bumped into one of our managers who had also received the same information and he immediately asked me to prepare to go on air to break the story.

At that moment, all I was thinking about was leaving the office to go and get my wife but she assured mw that she was safe and I would not be able to get to her location.

We started getting pictures of the situation at 14 Riverside via WhatApp and my stomach sank as my mind raced back to the Westgate Mall attack just over five years ago where at least 67 people lost their lives during a four-day siege.

I was relieved that my wife was a considerable distance from where the attack was taking place, but I also realised that I had many friends who worked at the 14 Riverside complex and I hoped that they were all safe.

I had to put all those thoughts behind me as I was asked to go on air immediately and update our viewers about the attack. 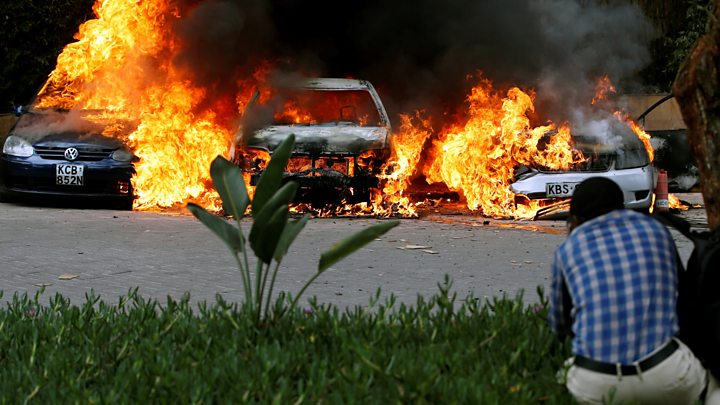 The information was scanty with many unconfirmed reports coming my way so I had to do my best to update those watching whilst also not revealing too much about the location of those still stuck in the building.

When another news anchor came to take over I quickly picked up my phone and begun making calls and sending messages, keen to see if my wife could now leave the bank and also to follow up on whether my friends were OK.

The next two days were some of the most difficult ones for the country as we made international headlines for terror-related reasons.

Sleeping, eating and our normal routines were abandoned in our newsroom as we worked round the clock to get information, verify it and broadcast it. This was all while also receiving distress messages from those within the buildings and sharing them with the authorities in charge of the anti-terrorism operation.

More on the hotel siege:

As Kenyan journalists we received both praise and criticism for our coverage and indeed there is always room for improvement.

Some of the mistakes seen during and after the Westgate tragedy were not repeated.

This time there were no front-page photos showing a survivor bleeding profusely whilst writhing in pain.

In fact one publication went with the headline “Kenya unbowed”, which was so well received it was taken up as a hashtag on social media by those wanting to share uplifting stories coming out of the tragedy.

Another lesson the media has learnt was to take government statements with a pinch of salt – especially when they give minimum information and officials refuse to field questions.

In this case the interior minister said several hours after the attack that all the buildings at DusitD2 hotel had been secured, and yet it later emerged that they were only taken in the small hours of the next morning.

‘Criticise but give credit’

Reporting on such attacks is a relatively new territory for the Kenyan media – the terror threat has increased over the last eight years since Kenyan troops joined the African Union force in Somalia to help the UN-backed government tackle al-Shabab.

It has some advice for those assigning or reporting stories with questions to ask themselves:

Nevertheless, Kenyans on Twitter were concerned by some aspects of the coverage last week, in particular that some commentary would aid the militants in knowing the special force’s strategy.

They also felt that some reporters were overzealous in securing interviews with people who had just come out of a life or death situation.

Al Jazeera’s Catherine Wambua-Soi gave her unique take on the quality of media coverage when she responded to another journalist on Twitter: “Don’t be too harsh. You know how hard it is to cover rolling news.

“Sometimes as journos we go abit off (get carried away) but often I think everyone does their very best under incredibly difficult circumstances. Criticize yes but also give credit where due.”

Don't be too harsh. You know how hard it is to cover rolling news. Sometimes as journos we go abit off (get carried away) but often I think everyone does their very best under incredibly difficult circumstances. Criticize yes but also give credit where due. ?

Hopefully as a media fraternity we are now more aware of the nuances of covering sensitive events.

It is now nearly a week after the attack and Nairobi is doing its best to put on a brave face despite the two days of horror at 14 Riverside Drive.

Many heroes emerged from the attack reaffirming the resilience and strength of the Kenyan spirit.

As the world turns its eyes away from Kenya the survivors will slowly try to pick up the pieces.

For those who lost their loved ones the painful process of laying them to rest and continuing life without them will become a reality.

As a journalist it is easy to cover a tragedy that is thousands of kilometres away from you – using footage from a news agency – but when the incident is closer to home, then the perspective changes completely.

The statistics are now not just numbers but real people: people you may have known, people you cared about, people who are now no more.