Home » Africa » US pastor arrested in Rwanda for ‘illegal’ meeting

US pastor arrested in Rwanda for ‘illegal’ meeting 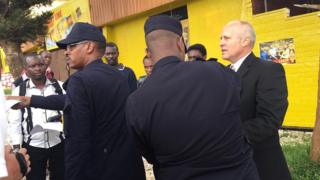 Rwandan police have arrested a controversial US pastor as he was about to conduct a news conference in the capital, Kigali.

Mr Schoof had been due to criticise the Rwandan government for shutting down his radio station and his church.

The Amazing Grace radio station was banned last year after it broadcast a sermon that described women as “evil”.

Mr Schoof’s church was closed in February, among hundreds of others, for failing to comply with building regulations “and for noise pollution”.

In May, Mr Schoof lost an appeal against the government’s media regulator in which he had tried to reopen his radio station.

The BBC’s Jean Claude Mwambutsa in Kigali said Mr Schoof had booked a venue for his press conference on Monday but the owners denied him access at the last minute.

As he stood outside talking to the media, police arrested him.

“He was arrested for holding an illegal meeting with journalists in a public space. It is illegal to hold meetings in public spaces without authorisation.”

In a press statement handed to the media before his detention, Mr Schoof said the Rwandan government had “taken a stand against God with its heathen practices”.

He also criticised the teaching of evolution in schools and the easing of restrictions on abortion, adding: “Is this government trying to send people to hell?”

Mr Schoof has previously questioned the freedom of expression in Rwanda, our correspondent says.

His radio station was accused of “promoting division in the country” last year after it broadcast a sermon by a local pastor who said women were “dangerous creatures of evil, going against God’s plans”.

Mr Schoof and his family have been based in Rwanda since 2003, according to their website.