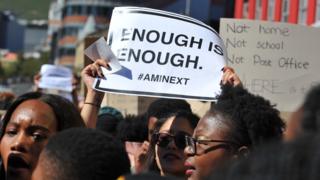 Sexual offences and murder rates have risen significantly in South Africa over the past year, according to new official crime figures.

Murders recorded by the police have been rising every year for the last decade, and sexual offences including rape have risen 4.6% this year.

The release of the figures comes amid growing concern about violence against women after a number of high-profile rape cases and murders in recent weeks.

Thousands of people took to the streets earlier this month to protest against the attacks.

Which crimes are getting worse?

Among sexual offences, sexual assault increased by 9.6% and rape by 3.9%

For crimes detected by the police as a result of their own activities (rather than reported by the public) there was a 19% increase in recorded sexual offences.

Crimes with the biggest increases

And there was an increase of more than 14% in commercial crime, the majority of which related to fraud.

However, recorded robberies and thefts from property or vehicles have shown decreases over the past year.

What are the longer-term trends?

Murder rates in South Africa have been steadily rising since 2011-12 according to official figures.

That averages out to about 58 murders a day.

Last year, there were a total of 52,420 recorded sexual offences.

This is lower than for the period 2009-15, but over the past three years the rate has been increasing.

In a statement on the release of the latest figures, the Minister of Police Bheki Cele, said reversing the rising murder trend of the last six years was a “mammoth task, but is doable”.

Murders and sexual offences since 2010

He also said there were plans to increase the number of specialist police units dealing with gender violence, as well as recruit and train more women officers.

South Africa’s parliamentary committee on police has said it is “unacceptable” that crime rises every year.

“The trajectory of crime cannot continue at the current rate and requires a shift in the way we view policing, from being responsive to being more preventive,” said Tina Joemat-Pettersson, the committee’s chairperson.

The Institute for Security Studies think-tank argued that the latest figures show that increased spending on policing and harsher sentences have not reduced violence.

It called for more investment in programmes that help with parenting, after-school care and anti-bullying programmes as “most violent behaviour is learnt in the home or in communities”.

How does South Africa compare globally?

South Africa does have a very high murder rate when you look at other countries.

United Nations figures for the number of murders per 100,000 people show that in 2017, only four other countries had a higher rate of homicide – Belize, Honduras, Jamaica and El Salvador.

And World Health Organization (WHO) data for 2016 for the murder rate of women and girls puts South Africa amongst the four worst countries.

This is the latest year for which data is available.

It is difficult to compare sexual offences because of the different ways police forces around the world record these, and also because there is likely to be significant under-reporting of sexual violence.