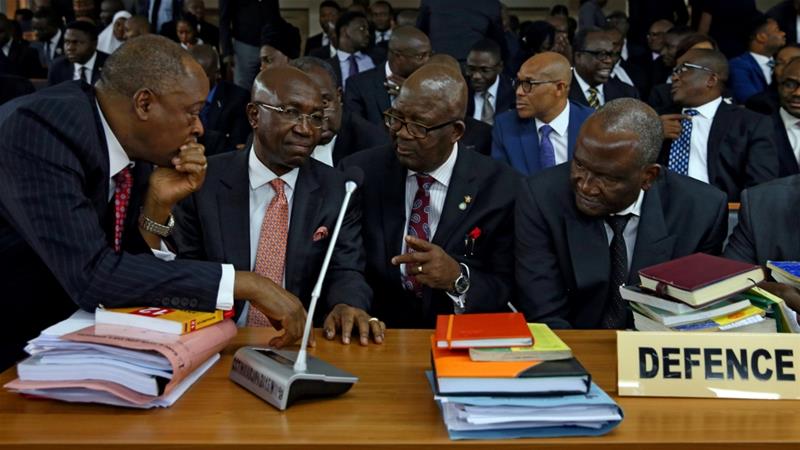 Nigeria’s main opposition party has suspended its presidential election campaign for 72 hours in protest against the suspension of the country’s senior most judge by President Muhammadu Buhari, it said.

The president on Friday said he had suspended the Chief Justice of Nigeria (CJN), Walter Onnoghen, who has been asked to appear before a tribunal over allegations of breaching asset-declaration rules.

Onnoghen has not responded to the charges and his lawyers say the tribunal does not have the authority to try him.

“President Muhammadu Buhari has unleashed despotism on our nation. We reject this in totality,” Kola Ologbodiyan, spokesperson of the Peoples Democratic Party (PDP), told Al Jazeera.

“We will ask Nigerians to resist this resort to self-help by President Buhari.

“It is clear, and manifestly too, that Nigerians have reached a consensus on the rejection of President Buhari.

“Buhari has seen his failure ahead of the polls and is determined to push our nation into the abyss of dictatorship. We resist this. We will deploy every measure under our laws,” Ologbodiyan said.

Buhari, who was a military ruler in the 1980s and was voted into office in 2015, is seeking a fresh term in an election scheduled on February 16. At stake is control of Africa’s top crude oil producer and one of the continent’s biggest economies.

Nigeria’s judiciary has helped resolve electoral disputes after past votes, some of which have been marred by violence and vote rigging. The CJN could preside over a disputed election result.

“In the first instance, we are suspending our campaign for 72 hours. It is our hope that President Buhari will listen to the voice of all lovers of democracy the world over and restore democracy in Nigeria immediately and without qualifications,” the PDP said in a statement.