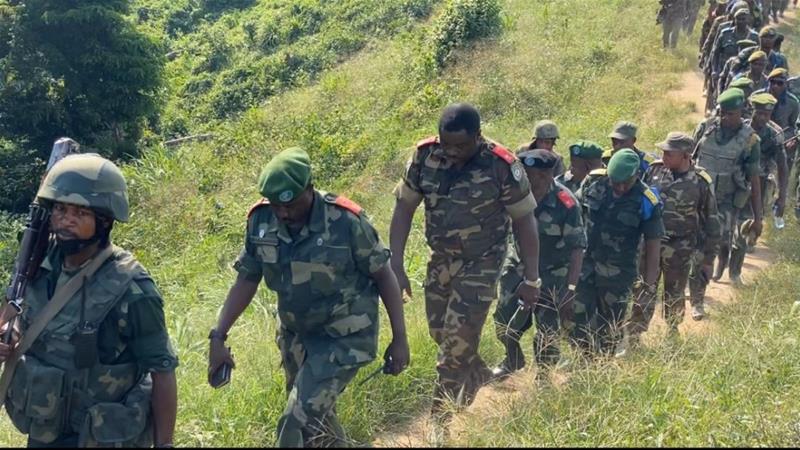 More than two dozen people were killed in two separate attacks in eastern Democratic Republic of the Congo, a region in the grip of militia violence, officials said on Wednesday.

“CODECO assailants attacked the people of the village of Koli while they were asleep, killing 22 civilians,” said Adel Alingi, head of the Djugu administrative region in Ituri province, referring to an armed group targeting the Hema ethnic community.

The raid took place overnight from Saturday to Sunday.

“All [of the dead] were from the Hema community,” Alingi told AFP news agency, adding the motive for the attack remained unclear.

“The people of the village have fled for their lives,” he said.

In the second attack on Tuesday, two soldiers, a civilian and five members of the Allied Democratic Forces (ADF) militia were killed in Beni, in neighbouring North Kivu province, said the army’s regional spokesman Anthony Mualushayi.

CODECO – whose official name is Cooperative for the Development of Congo – is an armed political-religious sect in Ituri drawn from the Lendu ethnic group.

Conflict between the Lendu, mainly farmers, and the Hema, herders and traders, has a long history in the gold and oil-rich province.

Tens of thousands of people have been killed between 1999 and 2003. According to the UN, most victims were targeted because they were Hema.

The conflict has reignited in recent years.

More than 700 people were killed in Ituri since late 2017, a UN report said in January, adding some of deaths might constitute a “crime against humanity”.

The ADF began operating in Uganda in opposition to President Yoweri Museveni.

It then fell back to North Kivu, DRC’s border province with Uganda, during the Congo Wars of the 1990s.

Since October 2014, the group has been accused of killing more than 1,000 civilians.

Hundreds died in violence that began last October, in apparent reprisal for an army offensive against the ADF.

The army has claimed a string of successes, saying it has “destroyed all the ADF strongholds” in the forest and jungle around Beni and killed five of six known rebel leaders.

The violence comes as new cases of Ebola were detected in the country in recent days, alarming international organisations that a new outbreak of the disease might take place amid the fighting.

The World Health Organization has said the Ebola outbreak in DRC still constitutes a public health emergency of international concern following the emergence of new cases.

The announcement on Tuesday came a day after the country had been expected to announce its outbreak – the tenth recorded in its history and by far its largest – was over.