After spate of violence, prime minister calls on Ethiopians to resist ‘forces’ threatening to impede progress. 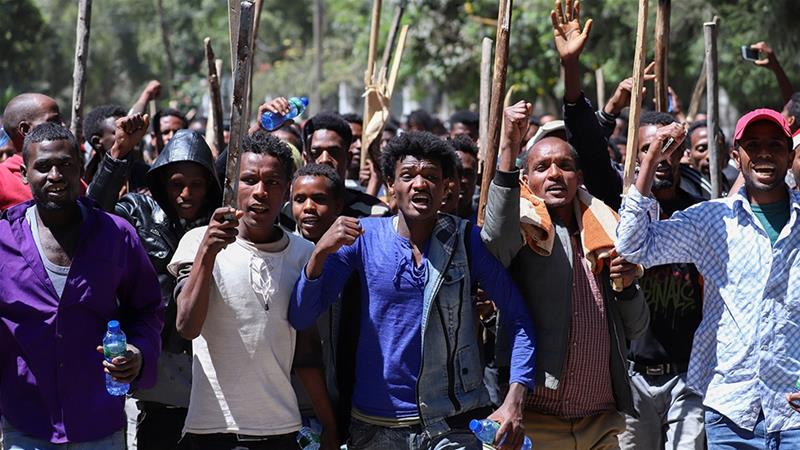 Ethiopian Prime Minister Abiy Ahmed has said the death toll from protests last month stood at 86, calling on citizens to resist “forces” threatening to impede progress in the country

Rallies against Abiy, this year’s Nobel Peace Prize laureate, erupted in the capital, Addis Ababa, and other parts of the Oromia region on October 23 after a high-profile activist and media mogul accused security forces of trying to orchestrate an attack against him – a claim police denied.

“We have to stop those forces who are trying pull us two steps back while we are going one step forward,” Abiy told a news conference with local news organisations broadcast by state-affiliated Fana Broadcasting on Sunday.

Abiy also provided a religious breakdown of the victims – 40 were Christians, 34 were Muslims and the rest belonged to other religions.

Supporters of highly-influential and controversial activist Jawar Mohammed took to the streets on October 23 and 24 to protest after he said on Facebook that police had surrounded his home in Addis Ababa and tried to withdraw his government security detail.

Jawar, who holds United States citizenship and is the founder of the Oromia Media Network, was at the centre of the initial street protests that last year brought Abiy to power – but he has recently become critical of some of the prime minister’s policies.

During a speech in Parliament the day before the incident at Jawar’s house, Abiy discussed media “fomenting unrest”, focusing on the role of Ethiopian diaspora figures.

“Using their second nationality and foreign passports as an advantage, these media owners are likely to run away to their safe havens after inciting conflicts and leading the country into chaos,” Abiy said.

Both men are from the Oromo ethnic group, and their feud highlights divisions within Abiy’s Oromo support base that could complicate his bid for a five-year term when Ethiopia votes in elections planned for May 2020.

Since his appointment last year, Abiy has initiated political reforms which have won him international praise but also lifted the lid on long-repressed tensions among the many ethnic groups in the country of more than 100 million.

The prime minister won the Nobel Peace Prize last month for his peacemaking efforts which ended 20 years of hostility with longtime enemy Eritrea.

Ethnic violence in Ethiopia has left more than two million people internally displaced, according to the United Nations.