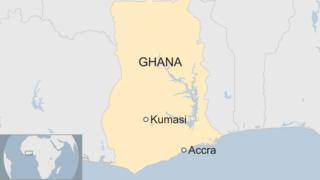 Two Canadian women have been rescued after they were kidnapped last week by gunmen in Ghana’s second city, Kumasi, a government minister has said.

The two students, aged 19 and 20, were working as volunteers for a charity when they were seized.

Kidnappings in Ghana, regarded as one of West Africa’s most stable states, are extremely rare.

However, there have been several recently, usually involving ransom demands.

Security forces carried out an operation in the early hours of Wednesday to rescue the women, Information Minister Kojo Oppong Nkrumah said in a statement.

The pair were volunteering for Youth Challenge International, which confirmed their names as Lauren Tilley and Bailey Chitty.

Canadian officials thanked the Ghana government for its cooperation “in the resolution of this case”.

In a statement, they said no further details will be released for privacy concerns “and out of respect to these two Canadians who have been through harrowing experiences”.

Ghana’s President Nana Akufo-Addo has vowed to take tough action to end the spate of abductions in the country.

The chairman of Ghana’s main opposition party, the National Democratic Congress (NDC), was briefly detained by police on Tuesday as a suspect in kidnappings.

“Credible and actionable intelligence” led to the arrest of Samuel Ofosu-Ampofo, police said in a statement posted on Twitter, without specifying which kidnappings he was allegedly linked to.

Mr Ofosu-Ampofo has not commented on the allegations, but NDC general secretary Aseidu Nketia said his arrest was an attempt to “intimidate us and frustrate our activities”.

In April, an Indian man was seized in Kumasi by an armed gang demanding a ransom. He was later rescued by police.

An Estonian diplomat was also rescued by police after being kidnapped in April in the capital, Accra, Ghanaweb reported.

Police are still searching for three Ghanaian women kidnapped in December in the southern city of Takoradi.