In an executive order, President Biden targeted all sides of the widening conflict in Africa’s second most populous country, demanding an end to fighting and safe passage for aid. 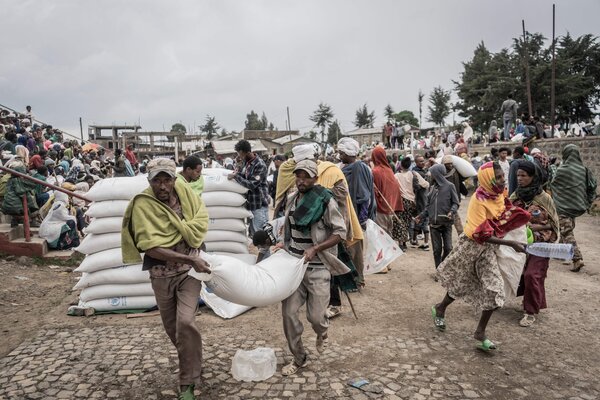 NAIROBI, Kenya — President Biden signed an executive order on Friday threatening sweeping new sanctions against leaders in the widening war in northern Ethiopia, the strongest effort yet by the United States to halt the fighting and allow urgently needed humanitarian aid to flow into the region.

The administration has not yet applied the sanctions, hoping to shift the course of the war without directly punishing officials from Ethiopia, Africa’s second most populous country and an important strategic ally. With both sides pushing hard for a military victory, critics said the latest measures may be too little, or too late.

Just 10 percent of required humanitarian aid reached the Tigray region last month as a result of Ethiopian government obstruction, according to two American officials who provided a background briefing to reporters.

Fighters from various factions have been accused of atrocities against civilians, with the latest accusations including the Tigrayan forces that are fighting the Ethiopian central government. And Prime Minister Abiy Ahmed has intensified a mass recruitment drive, and acquired new weapons, in advance of an expected surge in fighting next month, the officials said.

“Nearly one million people are living in famine-like conditions,” Mr. Biden said in a statement. “Humanitarian workers have been blocked, harassed and killed. I am appalled by the reports of mass murder, rape and other sexual violence to terrorize civilian populations.”

The sanctions threatened by the order would target individuals and entities from the Ethiopian and Eritrean governments, the Tigray People’s Liberation Front and the Amhara regional government, who face possible asset freezes and travel bans.

They are a step up from weaker and largely ineffectual measures, including visa restrictions, imposed by the United States in May. For now, the new sanctions have yet to be imposed on anyone, and one of the administration officials who provided background declined to give a timeline.

But action would be a matter of “weeks not months,” she said.

To avoid sanctions, leaders on both sides must agree to negotiations without preconditions and accept mediation under the former Nigerian president Olusegun Obasanjo, an African Union envoy who is scheduled to land in Ethiopia this weekend.

The Ethiopian government must allow daily convoys of trucks carrying humanitarian aid to travel overland into Tigray, and restore basic services like electricity, communications and banking, the official added.

“A different path is possible but leaders must make the choice to pursue it,” Mr. Biden said.

Critics, though, questioned the effectiveness of the latest American measures, variously calling them too late or unlikely to change the behavior of an Ethiopian government that has proved impervious to outside criticism so far.