Tens of thousands demonstrate across Algeria in a bid to keep up the pressure on ailing President Abdelaziz Bouteflika. 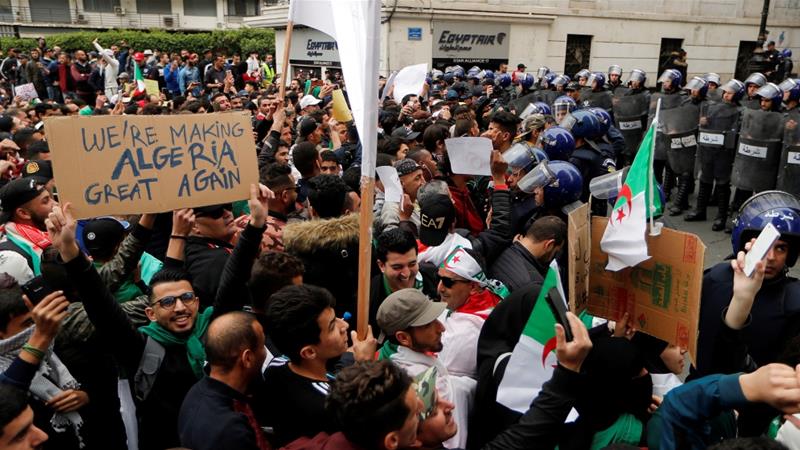 A rally on Friday in the capital, Algiers, was slowed to a near-crawl by the huge numbers taking part, with participation swelled by women marking International Women’s Day. Train and metro services were suspended without explanation.

While the rallies were mostly calm, police used tear gas in several areas of the city, including to block the road to the presidential palace, news agencies reported.

Later on Friday, state TV said security forces had detained 195 protesters, citing offences such as looting as grounds for the arrests.

Anti-Bouteflika protests were also staged in several other cities, including easterly Oran and westerly Constantine, according to Algeria’s TSA news website.

The demonstrations marked the third consecutive Friday on which Algerians have taken to the streets in a bid to press the 82-year-old president to step down.

The largest display of discontent in the North African country since the 2011 Arab Spring was sparked by the wheelchair-bound leader’s announcement last month he would stand for a fifth term in office in a presidential election scheduled for April 18.

Nassim Bala, an Algerian political activist present at the protest in Algiers on Friday, said the capital was gripped by a mass “democratic celebration”.

“People are now finally expressing themselves against the government, which has been reducing their rights for decades,” Bala told Al Jazeera.

“People are marching into the streets … [and] distributing roses and candies … today is very special,” he added.

Other protesters, meanwhile, said they were demonstrating in a bid to secure a “better future” for their children.

“We want to bring down the regime – the problem is the regime,” a female protester said.

Bouteflika has been all but absent from the public eye since suffering a debilitating stroke in 2013, prompting critics to question whether he is being used as a puppet candidate by a shadowy cabal of civilian and military figures close to the octogenarian.

He is currently in hospital in Geneva, Switzerland, for what the presidency has described as “routine medical tests”.

Swiss police said Rachid Nekkaz, an increasingly popular political activist opposed to Bouteflika, was arrested on Friday for trespassing at the facility where Bouteflika is being treated.

Nekkaz was denied the right to stand in the upcoming elections because he has previously held French nationality, even though he has renounced it and gathered the 60,000 voter signatures needed to run in the ballot.

He is supporting a cousin of the same name to run on his behalf.

Algeria’s constitutional committee is due to determine on March 13 if the presented candidacies are legitimate.

Nekkaz’s arrest came a day after Bouteflika issued his first warning to protesters, saying the rallies could destabilise the country.

In a letter carried by Algeria’s Press Service news agency on Thursday, Bouteflika cautioned against infiltration from “internal and external” parties aimed at “stirring seditions and spreading chaos”.

He also flagged the risk of a return to the “national tragedy” of Algeria’s years-long civil war in the 1990s and of the “crises and tragedies caused by terrorism” in neighbouring countries.

In a bid to quell the protests against him, Bouteflika has offered to limit his term after the April election and even to change the “system” that runs the country.

Some long-time allies of the president, including members of the ruling FLN party, have expressed support for the protesters, revealing cracks within a ruling elite long seen as invincible.

Algeria’s private Ashourouq TV station reported on Friday that several FLN party legislators had resigned to join the anti-government campaigners, but did not provide any further details.

Jeremy Keenan, an anthropology professor at the UK-based School of Oriental and Africa Studies, said Bouteflika’s government was under “unique pressure”.

Keenan told Al Jazeera the “gang” around the presidency had “miscalculated hugely” in putting the war veteran forward for a fifth term in a move which demonstrated they were “completely out of touch” with Algerians.

“They have robbed Algeria of much of its wealth … [and] they have utter contempt for the people,” he said.